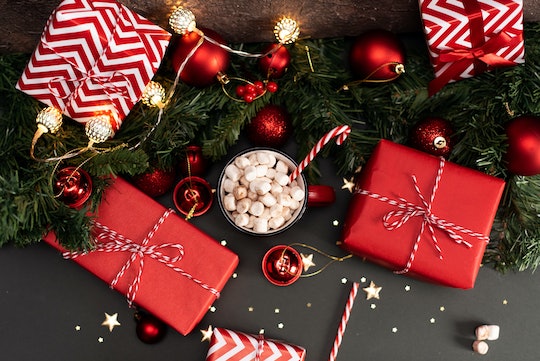 It may be summer still, but there's already some holiday magic to celebrate. News broke on Monday that one of Lifetime's 2020 Christmas movies will feature an LGBTQ+ romance as the film's main story for the first time. And as if that's not exciting enough, there will also be more diverse holiday stories shared in the 30 new films to be released, including one film executive produced by Tiffany Haddish. Happy Holidays indeed.

On Monday, the Lifetime Network announced this year's lineup of movies for its popular "It's A Wonderful Lifetime" holiday programming. According to Deadline, one of the movies set to be released is called The Christmas Set Up, which tells the story of Hugo, a corporate lawyer from New York heading home to spend the holidays with his mom Kate. His mom decides to to try her hand at setting Hugo up on a date with his high school friend Patrick, who also happens to be his secret crush. Things go well until Hugo gets a big job offer from London and then he has to decide what is truly important to him.

The Christmas Set Up will be the first holiday romance film centered on an LGBTQ+ couple from Lifetime, as Entertainment Tonight reported, but the network has been making moves in recent years to become more inclusive. In last year's Twinkle All The Way, the network saw its first same-sex kiss between supporting characters played by Brian Sills and Mark Ghanimé, according to The Daily Beast. The Christmas Set Up, however, will be the first full LGBTQ+ romance and it sounds like a good one.

Lifetime's news follows The Hallmark Channel's announcement last week that it will also include LGBTQ+ stories as part of its holiday lineup.

Beyond the new LGBTQ+ romance, the Lifetime Network announced several movies that pointed to a more diverse lineup for this season, such as A Sugar and Spice Holiday, which tells the story of a Chinese-American woman heading to her family home in Maine for the holidays directed by Jennifer Liao as well as Christmas Unwrapped that's executive produced by comedian Tiffany Haddish, according to The Hollywood Reporter.

"We are thrilled to continue our legacy of creating a holiday destination that is welcoming to all at Lifetime," executive vice president and head of programming at Lifetime Amy Winter told The Hollywood Reporter in a statement. "With more new movies than any one cable network for streamer, I couldn’t be prouder of the incredible talent joining us in front of, and behind the camera, on these new holiday movies."