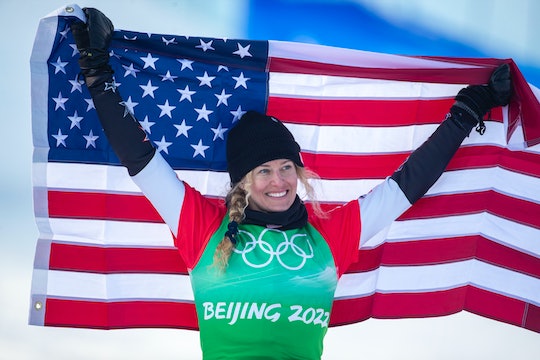 She is the oldest American female to ever win gold.

Talk about an incredible redemption story for Olympic snowboarder Lindsey Jacobellis. Not only did she deliver Team USA’s first gold medal at the 2022 Winter Olympics in Beijing, the 36-year-old is also the oldest American woman to ever win Olympic gold. (Update: On Saturday, Feb. 12, she won another gold medal, this time with teammate Nick Baumgartner in the mixed team snowboard cross event.) What a journey it has truly been for the snowboarder, especially after her difficult showing 16 years ago cost her a medal.

Jacobellis finished first in the snowboard cross event on Wednesday in Beijing, which meant that Team USA was finally able to claim its first gold medal. It was a big deal for the athlete, especially since she holds the record as the oldest American woman to ever win a gold medal in the Olympic Games. (For his part, Baumgartner is 40.) Jacobellis’s win came after another Team USA favorite, Mikaela Shiffrin, crashed out of her second event and the legendary Shaun White missed the podium in his halfpipe finals.

As a five-time Olympian and a first-time gold medalist, Jacobellis understands the disappointment these athletes must feel better than most. Particularly since she came so close to winning the gold at the 2006 Olympic Games in Turin and lost out because of a misunderstanding.

It seems that back in 2006, she thought she had already won and decided to do a little showboating, missed the jump, and settled for silver instead.

While discussing that event from 16 years ago, Jacobellis told Today, “They can keep talking about it all they want. Because it really shaped me into the individual that I am. It kept me hungry and really kept me fighting in this sport.”

Now 16 years and thousands of training hours later, Jacobellis was able to secure not just a gold medal, but the first gold medal for Team USA. It was a surreal moment for the athlete, who told The New York Times, “It kind of just seemed like an unbelievable moment. It didn’t seem real at the time.”

If ever there was an Olympic story to tell your kids, let it be Lindsey Jacobellis’ story. A woman who never stopped working to improve herself, who didn’t let one poor showing define her or her age stop her in a culture that puts so much emphasis on youth.

More Like This
Meghan Markle Calls On Men "To Be Vocal" In The Aftermath Of Roe v. Wade Ending
Ireland Baldwin Shares Her Abortion Story In An Emotional TikTok
Catherine Reitman Calls It Like She Sees It: “Being A Working Mother Is Impossible”
Sarah Michelle Gellar Is Facing A Terrifying Parenting Milestone: Sleep Away Camp

This article was originally published on Feb. 9, 2022