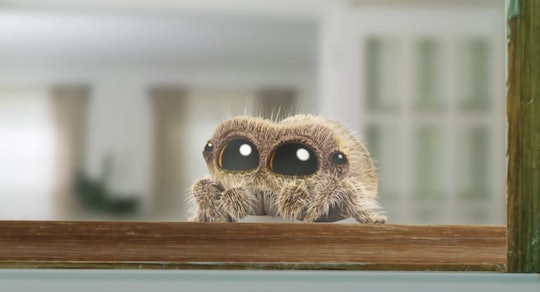 Lucas The Spider Is Coming To HBO Max

Romper has an exclusive clip from an especially cute episode set to debut later this year.

An adorable little spider with a big, bubbly personality named Lucas is joining HBO Max’s line-up for kids. Lucas the Spider follows the cutest 4-year-old jumping spider you’ve ever seen as he goes on adventures throughout his human-sized home and learns about the world around him. Sounds adorable, right? To help get you and your little ones even more excited for the premiere on HBO Max later this month, Romper can exclusively share a clip from an upcoming, never-before-seen episode of the CGI-animated preschool series.

Lucas may already look familiar to many. Well, to millions actually. Lucas the Spider first premiered on YouTube in 2017 and the channel currently has over 3.6 million subscribers. Later on, the show aired on the Cartoonito preschool block on Cartoon Network.

Since its premiere, Lucas the Spider has been offering its audience a different, cuter take on spiders to help kids (and adults) overcome their fears of the insect. “I want people who are afraid of spiders to say ‘aww,’” creator Joshua Slice said in a 2018 interview with The Dodo. “I wanted to challenge people to ask them the question of what you would do if encountered of its character and that's why I kind of wanted to make it a little on the realistic side.” (Fun fact: Slicer’s nephew Simon is actually the voice of Lucas.)

In Romper’s exclusive clip from an upcoming episode set to debut later this year, you get a taste of just that. The clip below shows Lucas attempting to introduce himself to a cactus on a counter. “Hi, I’m Lucas,” he says. “I hope you don't mind if I hang out here with you for a little while.” Lucas then goes on to talk about his other hobbies, such as singing and playing with his friends, except Arlo (his owl friend), who he says could play a little rough.

From YouTube to Cartoonito and even his own plushie, Lucas the Spider has been a hit with kids for years now. And if your little ones love Lucas and all sorts of creepy crawlies, be sure to check out one of the many shows and movies about insects.

The first season of Lucas the Spider, which has already aired on Cartoon Network, will begin streaming on Cartoonito on HBO Max on March 25 and new episodes will debut later in 2022.