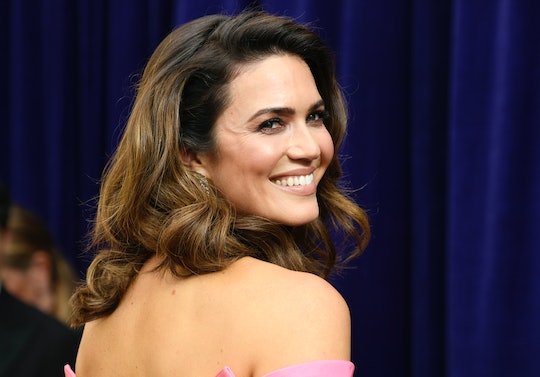 Mandy Moore is a mom of two — and has officially joined the “two under two” club! On Friday, the This Is Us star posted three precious black and white photos taken in the hospital to announce that she gave birth to her second child, another baby boy, with husband Taylor Goldsmith and also revealed his adorable name. And the nickname they’ll call the little guy.

“Ozzie is here!” Moore announced on Instagram on Oct. 21, adding that his full name is Oscar Bennett Goldsmith.

“Oscar Bennett Goldsmith arrived a little late but with much aplomb (and an easier/speedier delivery than his big brother, much to the delight of his parents),” Moore added. “Every adage is true: our hearts have doubled in size and the immediacy of the love is astounding. He is beyond words and we are so grateful for our family of four!”

Moore and Goldsmith will certainly have their hands full. The couple’s first child, August “Gus” Harrison Goldsmith just celebrated his first birthday in February 2022, so many sleepless nights are surely ahead of them.

Moore did not elaborate on the deeper meaning behind her newborn’s name, but it’s likely that a lot of thought went into it. Shortly after Gus was born, Moore revealed on Instagram that his name was partly inspired by Goldsmith’s birth month (August). The mom of two, whose full name is Amanda Leigh Moore, also shared that their firstborn’s name represents both of his parents. “For our anniversary in November, T gifted me with this blanket with the 'A' (for Amanda) made from extra material from my wedding dress and 'T' (for Taylor) from his wedding shirt,” she captioned a photo of a baby blanket. “Felt like a very fitting amalgamation of our whole story.”

So fingers crossed that we get to know a little intel on the inspiration behind Ozzie’s sweet name!

As Moore mentioned in her Instagram post to announce his birth, she’d been anxiously awaiting Ozzie’s later-than-expected arrival. Last week, she shared on Instagram that they were busy playing the “waiting game” and also gave a little love to Gus.

“As we play the patient waiting game, I’ll take all the snuggles with the sweetest guy I know,” she captioned a sweet photo of her holding Gus against her chest. “He’s still too young to understand the concept of baby brother but intuitively I think he knows there’s change in the air and he’s going to be the best big brother ever.”

And that change is finally here — and he’s pretty dang cute.