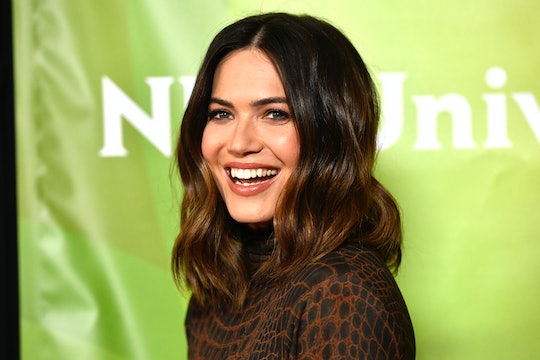 It's not like she's never changed a diaper before.

Who needs baby showers and childbirth classes? In a new interview with Today, actress Mandy Moore said This Is Us has prepared her for motherhood. Moore plays Rebecca Pearson — a mom of three — on the NBC drama, and will soon become a mother to her own child when she gives birth in the new year. But this won't be completely foreign to her, since she has had a bit of practice in her TV role.

"It's funny, I mean having played a sort of matriarch of a family for the last five years and getting to sort of see children at various different chapters and stages, I feel like I am pseudo-prepared as I can be," she told Today host Hoda Kotb. "I've had babies and toddlers and I have adult children, so I've gotten a pretty good taste and lay of the land."

In case you didn't know, This Is Us is told in flashbacks and flash forwards, according to E! News. Throughout the past few years, Moore has played a woman pregnant with triplets, a bright eyed new mom, a mom of teens, and even a grandmother. But in spite of experiencing the many stages of motherhood on TV, Moore told Today that she and her husband, Taylor Goldsmith, still need a little help in figuring out how to parent.

"Everyone wants to give you unsolicited advice," she said. "I'm all for it. I welcome everything because I know nothing."

The actress is still filming Season 5 of This Is Us and will continue to film into her pregnancy. The show's creator, Dan Fogelman, told Entertainment Tonight that it hasn't derailed the plans for the season and Moore confirmed to Today that her growing bump will be disguised using "very conspicuous costumes." "From my perspective, I was just happy for Mandy," Fogelman told Entertainment Tonight. "And so, yeah, we haven't really adjusted our plan. We're just going to work Mandy right 'til go time."

Even before she got pregnant, Moore was open about the motherhood lessons This Is Us taught her, telling Us Weekly in 2019 that she show even taught her how to change a diaper. "It's shown me that maybe I'm not as patient as I thought I was," she said. "But maybe it will be different with your own children." She reiterated this to Parents, telling the magazine that same year that she has a "deeper appreciation" for all that mothers do.

Since the show is set to end with Season 6, according to Deadline, Moore will still be able to learn a little more about parenting and motherhood from the upcoming storylines. While it's likely her pregnancy and first few weeks of motherhood won't be as dramatic as what her character has had to go through on This Is Us, there is still a lot to be gained.