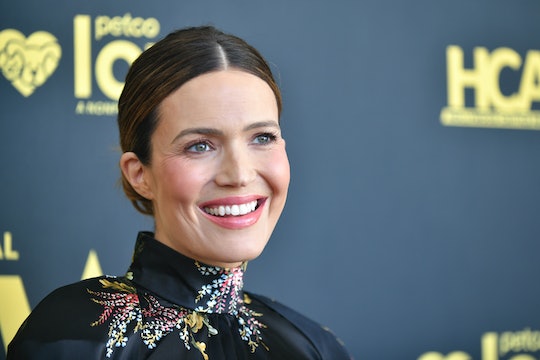 But, don’t worry, the mom of two still managed to snap a cute photo!

Taking a toddler trick-or-treating is a real crap shoot, as mom of two Mandy Moore recently discovered. The hope is that it will be an exciting time for parents to dress up their adorable toddler in a really cute costume and take them out for Halloween in their neighborhood. The reality is that toddlers don’t always go along with their parents’ plans. And for Moore’s 20-month-old son Gus, he was simply not into his Halloween costume. Even though he obviously looked extremely cute, he was having none of it.

Moore and her husband Taylor Goldsmith looked all excited to be taking their oldest son Gus out for his second Halloween. Perhaps especially since they recently welcomed their second son, baby boy Oscar “Ozzie” Bennett, just over a week ago and they are now part of the “two under two” club, as she called it in her birth announcement. The couple dressed their oldest son Gus in a truly adorable mallard duck costume and took a photo of him wearing it for posterity.

So now, years to come, they can look back on Gus’ second Halloween and see him looking incredibly irritable in his duck costume. Because he was clearly “not a fan,” as Moore wrote on her Instagram Story.

Gus should really be counting his blessings this Halloween because he was only wearing one costume. Last year, Moore dressed him in multiple costumes, including a very cute sushi number, and to be honest he actually looked quite happy in those photos. So maybe he just didn’t want to be a duck this year. Or maybe he’s not going to be a Halloween person.

Fortunately, Gus is a much bigger fan of his baby brother Ozzie than he is of being dressed up as a duck to go get candy on Halloween. The sweet little boy looked so proud to be “relishing his role as big bro” holding his brand new baby brother Ozzie when he first arrived last month in a photo Moore shared on Instagram.

Gus might want to get more accustomed to Halloween costumes, as you know next year both he and his brother will be dressed up again by their parents. Probably in matching costumes too. Maybe that will be the key to unlock his holiday joy.