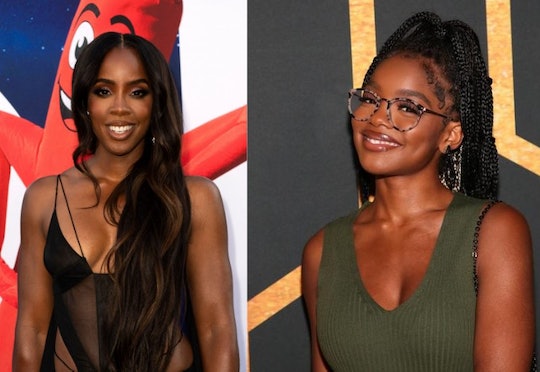 Marsai Martin is celebrating the big 1-8! Over the weekend, the black-ish actress and voice of Liberty in PAW Patrol: The Movie turned 18 years old and celebrated her special milestone in a gorgeous emerald green, pearl-detailed gown that was fit for a princess. Martin’s besties also showered her with love, including Kelly Rowland who shared the loveliest post about the birthday girl on her Instagram.

“Dearest Marsai!! To know you, is to love you,” Rowland began her Instagram post, which featured some fun and silly video clips of the duo. “PERIOD! May God grant you, all your hearts desires, AND THEN SOME!! HAPPY BIRTHDAY GENIUS! Love you.” Martin commented under the post, “I love you so much!”

“i love y’all’s relationship,” one fan wrote on Rowland’s post, while another commented on their bond, “Just like your baby sis!” One more inquired, “Y’all giving sitcom vibes. We’re waiting.”

With a loving birthday post like that, it’s no surprise that Rowland attended Martin’s 18th birthday party, which had a fairytale theme. “Marsai’s Kingdom of FarFar Away!,” Rowland captioned her Instagram post, which featured photos of her rocking a velvet, fitted gown.

Martin’s “Far Far Away” birthday party took place on Sunday and included celebrity guests such as Rowland and actress Karrueche Tran. “Thank you God for another year around the sun,” Martin captioned her birthday post, wearing a stunning emerald green gown, designed by DaSh Holcomb of Da Shoné By DaSh.

From black-ish to PAW Patrol, Martin has literally grown up and glowed up before our eyes. Martin is the CEO of her own media company, Genius Entertainment, and made history as the youngest Black executive producer. Martin knows she’s a role model for young girls and it’s a role she takes seriously. “It makes me keep going,” she told Romper last August. “It makes me realize why I was in this industry in the first place was to show young Black girls that they can do anything at any age and any time.”

Beyond her entrepreneurial ventures, Martin and Rowland are set to star together in an upcoming movie titled Fantasy Football, which is currently in production. Martin will play a 16-year-old who discovers she can take control of her professional football player dad on the field using the EA Sports Madden NFL game and Rowland will play her mother.

Needless to say, fans are looking forward to seeing Rowland and Martin’s mother-daughter dynamic plays out on the big screen!