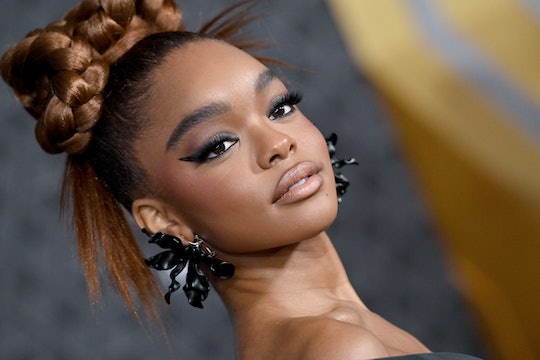 “You are never alone. Listen to your body. It always shows you signs.”

Marsai Martin is recovering after having surgery to remove an ovarian cyst. Over the weekend, the Little star shared on her Instagram Story that she had to remove a “large” cyst that had been causing her “constant pain” for over four years.

“If you missed my live, long story short, I had surgery for my large ovarian cyst that gave me constant pain for 4+ years,” the 18-year-old actress wrote alongside a black-and-white video from the hospital. “I really don’t remember any of this sh*t because of the anesthesia, lol. But I will say that I am very grateful to have family and educators by my side in support of this process.”

Martin went on to explain why she choose to share the personal moment with her fans. “The only reason I am sharing this is so I can hopefully spread awareness and share my experience to the young women out there that may be going through the same thing or have difficult menstrual cycles,” she continued. “You are never alone. Listen to your body. It always shows you signs. Health is wealth.”

Ovarian cysts are “sacs, usually filled with fluid, in an ovary or on its surface,” according to Mayo Clinic. The cysts are common, but can burst open or become twisted, which could cause serious complications. The academic medical center explains that large ovarian cysts can cause pelvic pain, bloating, and feelings of fullness or pressure.

Martin shared an update the following day, posting a selfie while getting her makeup done and thanking her fans, adding that the surgery was actually done 10 days ago and she’s doing well.

“Thank y’all for all the love,” she began. “The procedure was 10 days ago and I'm now feeling fine. I also appreciate the stories from folks that have been through the same thing! But I'm back and I'm betta.”

The Genius Production CEO has kept the details of her physical health private up until now, but has been very open about her mental health. Earlier this year, she partnered with Pinterest for Mental Health Awareness Month in May on a video series called “Mind Your Wellness.” In the videos, she showed viewers how she prioritizes mental health in her daily life and one outlet is TikTok. “When it comes to work or anything that can quickly get me stressed out, I keep in mind that mental health is everything and I make sure to slow down and be present,” she told Elite Daily in June.

The actress has also used her platform to discuss the importance of representation in media. For her latest movie, Fantasy Football, Martin gushed about her co-stars Omari Hardwick and Kelly Rowland, who play her parents, during an appearance on The Breakfast Club in November and the film’s greater impact. “I think being able to have an opportunity to work with people like Kelly and Omari and just to see people and different families of all different cultures just exist, and be able to just have regular conversations that you would have in your own households is very important,” she said at the time.

Indeed, speaking to Romper in 2021, Martin acknowledged that she’s a role model to many and said she hopes she can encourage young Black girls to follow their dreams. “It makes me keep going,” she said. “It makes me realize why I was in this industry in the first place was to show young Black girls that they can do anything at any age and any time.”