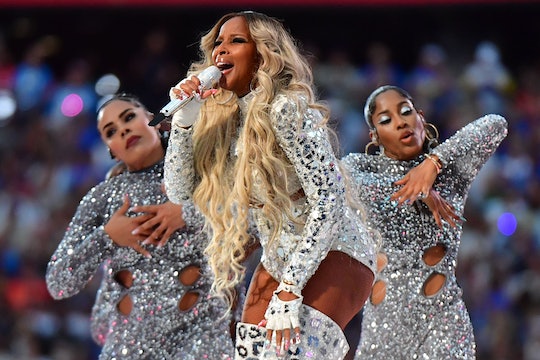 Like the legend says, let’s all “Let loose and set your body free.”

R&B legend Mary J. Blige was one of the dynamic hip-hop performers headlining the 2022 Super Bowl halftime show, with fellow icons Dr. Dre, Snoop Dogg, Kendrick Lamar, and Eminem. Blige’s fans expected the songstress would belt out a few of her classic hit songs including “Family Affair.” But despite the title, it’s not about a family affair at all, more like a night out with your friends and no drama!

“Family Affair is all about having a good time

Indeed, the lyrics encourage folks to leave any drama and situations behind and dance the night away as if they don’t have a care in the world. Hence the lyrics...

“Come on, everybody get on up, Cause you know we gots to get it crunk, Mary J. is in the spot tonight as I'ma make it feel alright. Come on baby, just, party with me. Let loose and set your body free. Leave your situation at the door. when you step inside jump on the floor.”

The song came out more than 20 years ago

The song was written in 2001 and is on Blige’s fifth album, No More Drama. The energized lyrics and beats were meant to give anyone who listened to it a feel-good rush. Along with Blige, the hit song was written by her brother Bruce Miller, Camara Kambon, Michael Elizondo, and her Super Bowl stage-mate Dr. Dre. And even though the single was on the top of the Billboard Hot 100 list for several weeks, Blige did not immediately recognize how big of a hit it was really was.

“I don’t think I realized I was successful in music until ‘Family Affair’,” the Power Book actress recalled during a June 2021 interview with BackstageOL about the moment she realized her single was a crossover success across hip-hop and beyond. “I was on tour and the bus driver was a white boy who was listening to his country music radio station. I’m sitting at the front of the bus and ‘Family Affair’ came on. I got really nervous and said, ‘Something different happened, why is my song on the country station?’ ‘That’s when I realized that I was huge, because country is a big deal. The bus driver said, ‘This is the best thing in the world. This is our song!’”

“Family Affair” made the 2022 Super Bowl

While it wasn’t confirmed until Sunday that Blige would perform “Family Affair,” fans were thrilled to hear it once again and see the Queen of Hip-Hop Soul on the big stage.

The Grammy-award-winning actress wasn’t paid to perform the Super Bowl LVI Halftime Show; no performer is as the NFL pays for production costs. But the lack of pay did not bother her because it’s an the opportunity of a lifetime. “Listen, you’re gonna be paid for the rest of your life off of this,” she said on The Cruz Show. “People are gonna be knocking at your doors. They don’t have to pay me, but if they was paying it would be a lot of money.”

Blige’s “Family Affair” was iconic in 2001 and remains a classic to this day. And lucky for us, the singer has a new album, Good Morning Gorgeous, coming out in 2022.

More Like This
H.E.R Is Becoming A Disney Princess As Belle In New Beauty & The Beast TV Special
Obama Also Can't Stop Listening To Beyoncé’s Song Of The Summer "Break My Soul"
Alexandra Breckenridge Has A Sweet & Adventurous Little Family With Her Husband
Yellowstone's Kelly Reilly Has A Much More "Content" Married Life Than Beth Dutton