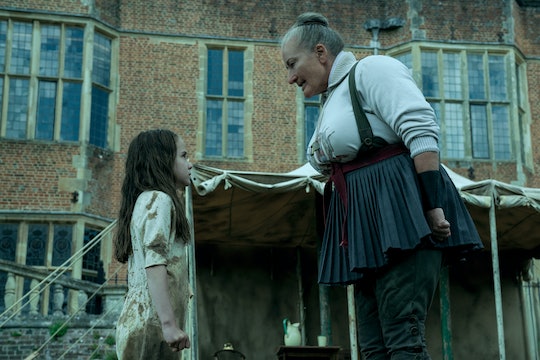 What Parents Should Know Before Watching Matilda: The Musical With Your Kids

An updated version of Roald Dahl’s 1988 classic Matilda is coming to Netflix on Christmas Day. This time, as a musical. But because the story can be quite dark, especially thanks to Miss Trunchbull, fans of Matlida might be wondering where this new version might land, as far as scaring kids go. So is Netflix’s version of Matilda appropriate for kids? If so, what age? Here’s everything parents need to know.

Matilda is a dark musical tale for the ages.

Roald Dahl’s Matilda the Musical on Netflix is based on the hit Broadway musical of the same name, which was in turn based on Dahl’s book about Matilda Wormwood (played by Alisha Weir in this version), a curious young girl with a big imagination who happens to have truly horrible parents (played by Stephen Graham and Andrea Riseborough). While her parents are forever working on get rich quick schemes and treating her horribly, she finds her own little ways to get back at them and develop her own magical skills with the help of the sweet Miss Honey (Lashana Lynch). Unfortunately, her school is run by the horrible Miss Trunchbull (Emma Thompson), and Matilda must lead the students in a revolt against her.

Miss Trunchbull’s extreme antics might be too scary for kids.

It’s important to remember before you sit your kids down for a viewing of Matilda: The Musical that Miss Trunchbull’s antics are extreme. She’s out there swinging kids around by their pigtails and catapulting them across the playground. In this version, she looks to be at least nine feet tall. She truly loathes children and does horrible things to them, like forcing a kid to eat an entire chocolate cake and you know that will ruin chocolate for them forever which is simply cruel. The idea of an over-the-top character like Trunchbull might be funny to older kids, especially once she gets her comeuppance, but little ones might be genuinely freaked out that any adult could be so cruel to kids.

Violence and the abuse Matilda suffers from her own parents might be disturbing for some kids.

Let’s also not forget the fact that Matilda’s own parents don’t take care of her. It could be a bridge too far for younger kids. And yes, Matilda does lead a pretty hilarious revolt against the adults who have wronged her, but even that gets quite violent.

What is Matilda: The Musical rated?

Matilda: The Musical on Netflix is rated PG for scenes of violence as well as some rude language and thematic elements. Kids over the age of 8 years old should be able to understand the concept that this is all fantasy, but the younger ones probably won’t.

Common Sense Media noted in its own rating that the movie has plenty of positive messages, like Matilda’s unwavering courage and Miss Honey’s constant kindness, but the scenes can be pretty scary. Especially since Emma Thompson does such a bang-up job as Trunchbull.

More Like This
Pixar’s 'Turning Red' Is Nominated For An Oscar — Here’s How To Watch It Right Now
Marcel The Shell Is Officially An Oscar-Nominated Movie Star
Marcel The Shell Is Heading To The Oscars!
Freeze! The Single From The New 'Bluey' Album Just Dropped
What Parents Are Talking About — Delivered Straight To Your Inbox