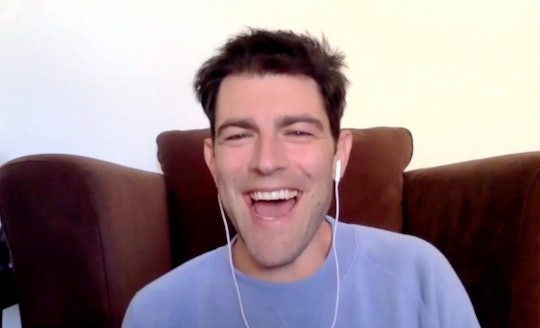 Remote schooling has given parents a whole new appreciation for what teachers go through every day. Trying to hold the attention of dozens of kids for hours at a time while also trying to educate them is truly God’s work. As parents, we really appreciate teachers. But little kids? Ehh, perhaps not as much. In a recent Instagram post, New Girl star and father of two Max Greenfield revealed how his son is coping with homeschooling these days and everyone is relating to the struggle. Teachers, parents, and probably even kids.

Much like millions of parents across the country, Greenfield and his wife Tess Sanchez have been dealing with the rigors of homeschooling their two kids, 11-year-old daughter Lilly and 5-year-old son Ozzie, this past year. It hasn’t been easy on anyone, as evidenced by the photo Greenfield shared of his son Ozzie in honor of Teacher Appreciation Week.

In the hilarious photo, you see a laptop open to a teacher doing her best to do her job as Ozzie lies curled up on the table on the other side of the laptop, either sleeping or staring blankly off in space, it’s tough to tell.

Either way, he’s definitely not paying attention to his teacher, and his dad essentially just called him out with his post. “#teacherappreciationweek thanks #MsPatricia,” Greenfield captioned the photo.

Max Greenfield’s son is hilarious in a teacher appreciation post.

This teacher appreciation post resonated strongly with the proud dad’s followers, particularly teachers. “I’m a teacher and I feel related to this picture,” one fan commented. “Sometimes it’s frustrating not just for students, but teachers too. #weareallMsPatricia.” Another teacher confirmed that this post was “100% accurate. This is my life as a pre-k teacher.”

Still, there were some people who really felt for Ozzie. “I feel this child’s mood deep lol,” wrote one person, while another added that his teacher would probably love to be taking a rest herself, “Ohhh, Ms. Patricia. I bet she wants to the same!”

Greenfield has been helping both of his kids with their homeschooling and has often shared his gratitude for teachers. When his daughter Lilly graduated from fourth grade last June, for instance, he shared a post saying #GodBlessTheTeachers in honor of all their hard work. When the lockdown first hit last March, Greenfield was posting regularly about homeschooling with daughter Lilly because he “needed to find a way to laugh about this,” he explained to Kelly Ripa and Ryan Seacrest. A few months later, the fun was wearing off. By July he told Kelly Clarkson in an interview that he was “exhausted” by homeschooling. It doesn’t take long to get tired out.

His son Ozzie will appreciate all that teachers do some day. I’m sure of it. Just as soon as he’s done his table nap.