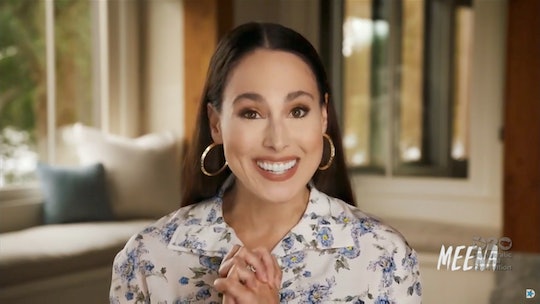 Meena Harris Released A New Children's Book All About Ambition

"...when it comes to our own ambitions, we all have some unlearning to do."

The pearls do not fall from the neck when it comes to Vice President Kamala Harris and her family. Just ahead of the inauguration, New York Times bestselling author Meena Harris released a new children's book called Ambitious Girl that's all about diversity and ambition.

Harris is the niece of Vice President Harris and like her aunt, she is passionate about owning your ambition and encouraging young girls, specifically minorities, that they can do and be anything they want to be. "I’m really proud of this book, and I wrote it because I think it’s so needed," Harris captioned a video of her daughter reading the book on TikTok. As her toddler flips through the pages of the book, she says, "That's mommy...mommy wrote this book."

Released on Jan. 19, one day before her aunt became our first woman and first woman of color to hold the office of vice president, Ambitious Girl tackles the strong woman stereotype. According to a press release shared with Romper, the children's book tells the story of a young girl who sees a strong woman on TV labeled as "too assertive" and "too ambitious." The observation takes the little girl on a "journey of discovery" in which she learns about challenges faced by young girls and women and how they overcame those obstacles that were meant to knock them down.

"It shows a girl who looks like my own daughter and tells her, and her brother, that women’s ambition is powerful and something to be celebrated," actress Mindy Kaling said in a review of the book.

Ambitious Girl is Harris' second children's book. The first one, Kamala and Maya’s Big Idea, which was released last year, is based on the childhood of her Aunt Kamala and her mother, Maya Harris, and other ambitious women in her family.

In an interview with Business Insider, Harris stressed the importance of representation in her literary works and in real life, starting with her aunt. "For young girls to see someone who looks like them elected, to the second-highest office in the land, is really an incredible feeling that we've all been fighting for a very long time," she told Business Insider.

Harris is also a lawyer and founder of Phenomenal Woman, a campaign that helps bring awareness to social causes. It's clear that ambition is second nature in the Harris family; in fact, the author shared in a November 2020 essay for Elle that the vice president inspired her to become a lawyer and write children's books. She also shared what she hopes readers will take away from her new book.

"I hope this will be taught in homes, where all too often girls are sheltered and supervised, taught to value humility and politeness overdrive and persistence — at the risk of being seen as 'too this' or 'too that,'" she wrote in Elle. "And I hope grown-ups will learn it, too. Because when it comes to our own ambitions, we all have some unlearning to do."

Ambitious Girl is available to purchase now on Amazon and the Phenomenal Girl website.

More Like This
Take An Exclusive Look At A New 'Daniel Tiger’s Neighborhood' Episode About Pool Safety
Exclusive: Mickey Mouse Funhouse Introduces Deaf Character Named Fig
Bluey Creators Set The Record Straight About That Rumor The Show Is Ending
Karamo Brown Teamed Up With His Son On A New Children’s Book To Share A Powerful Message