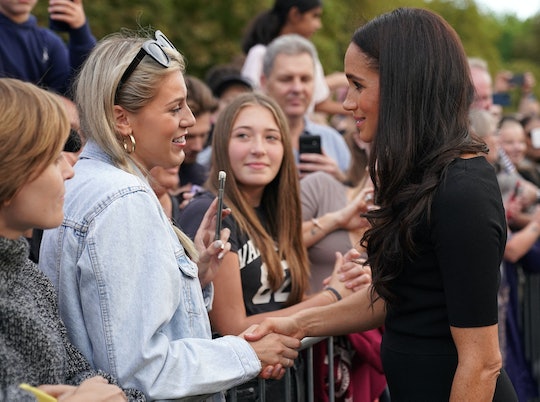 “I just wanted to show her that she's, like, welcome here.”

Two days after the death of Queen Elizabeth, Meghan Markle joined Prince Harry, and the newly titled Prince and Princess of Wales on a walkabout at Windsor Castle to honor the late matriarch. While royal watchers were no doubt impressed by this show of family unity, one moment that stood out from the somber day was when Markle shared a sweet hug with a British teen who waited in the crowds and wanted to make the Duchess of Sussex feel welcome.

In what was surely an overwhelming experience amplified by worldwide attention, Markle still took the time to create a very intimate moment of connection that says so much about her character. When she walked up to the crowds, she shook hands with one of the well-wishers and began a conversation, footage of which was later shared on Twitter by @SheTweetsSA.

Markle was the epitome of grace as she asked the teen’s name (and complimented her on it too). After learning that the girl had been waiting for two hours, the Archetypes podcast host said, “Oh goodness. Well hopefully you’ll be able to get home soon.” Unsurprisingly, the teen was not only taken aback by Markle’s undivided attention, she was stunned by her gorgeousness too. “You’re literally so beautiful,” she told the Duchess of Sussex. The two then shared a hug.

In an interview with CNN, the teen revealed what prompted her to ask Markle for a hug in the first place: "I don't know, it just went through my mind, like everyone was kinda cheering me on to, and I guess I just felt like I needed to in a way, like I just really wanted to at least hug her, because I look up to her in some ways and it just felt like it was the right thing to do," she explained.

"I feel like it was quite nice to see William and Kate and Meghan and Harry together, and it was fine, but yeah, I just wanted to show her that she's, like, welcome here, I guess, and I wanted to hug her after everything that's happened, really," the girl continued.

It’s pretty bold for a young girl to ask one of the most famous women in the world to share such a close embrace. But Markle’s response and generosity is really not so surprising. The mother of two has a history of displaying memorable acts of kindness, and once even gave her own coat to a fellow mom and baby in need.

During such difficult times and with endless scrutiny on Markle too, it’s also quite possible that the Duchess of Sussex needed that hug too.