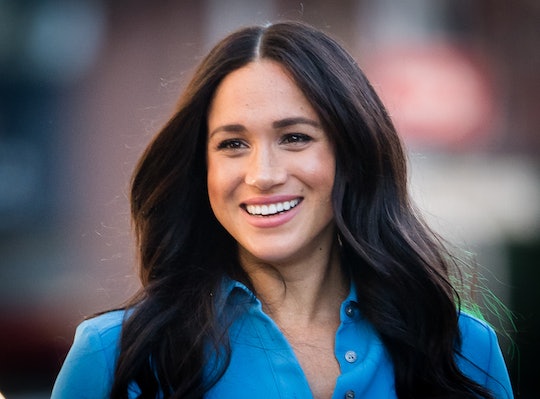 This Detail About Meghan Markle's Pregnancy Announcement Dress Is So Sweet

It was made when she was expecting Archie!

After sharing the happy news that their 21-month-old son Archie is "going to be a big brother," all eyes were on Meghan Markle's lovely pregnancy announcement and the dress she was wearing in it. Sure it was beautiful, of course, but it also apparently has a special connection to her pregnancy with little Archie.

They did not share the sex of the baby or Markle's due date, but fortunately they did share a gorgeous photo of the couple shot from their home in Montecito, California by the duchess' longtime friend and frequent photographer Misan Harriman. The photographer told British Vogue that he took the photo remotely with his iPad from his home in London and shared that the royal couple were naturals. "With the tree of life behind them and the garden representing fertility, life and moving forward, they didn’t need any direction, because they are, and always have been, waltzing through life together as absolute soulmates," Harriman told the magazine.

In the black-and-white photo, Markle and Prince Harry are both barefoot. He is wearing a button down shirt and slacks, while Markle rests her head in his lap wearing a pale floor length dress that looks to be made of linen. That dress, according to People, was actually custom made for Markle during her pregnancy with Archie by Carolina Herrera.

The use of a well-loved dress, already worn during her pregnancy with Archie, and the casual nature of the photo all speak to a very different lifestyle than the one Markle and Prince Harry lived as senior royals in the United Kingdom.

This isn't the first time Markle has worn a beautiful Caroline Herrera dress while pregnant. In fact, as Page Six pointed out, she wore a blue dress by the designer when she visited Morocco and was expecting Archie in February 2019.

Markle and Prince Harry's pregnancy announcement photo has already become so iconic that fans of Notting Hill, the 1999 romantic comedy starring Hugh Grant and Julia Roberts, are noticing some other intriguing details, as TODAY reported. Apparently the photo of Prince Harry and Markle looks a lot like one of the last shots of the film, where a pregnant Roberts (who played an American actress falling in love with a charming Brit) is laying with her head in Grant's lap.

Coincidence? Probably. But it doesn't matter. Much like the detail about Markle's pre-worn maternity dress, people seem to just be looking for more ways to be happy for the couple and celebrate their exciting news.