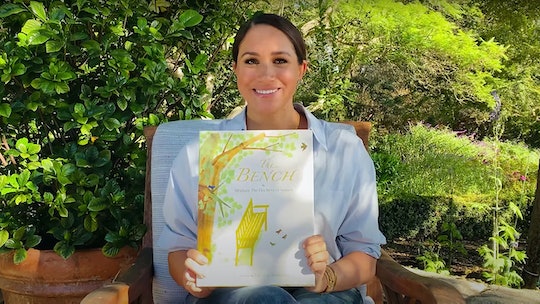 Eagle-eyed fans noticed something sparkly on her wrist.

Meghan Markle’s recent appearance reading her children’s book The Bench for Brightly Storytime on YouTube was amazing for all sorts of reasons. First off, she was reading her best-selling book, presumably in her backyard on that famous bench itself. Second, she looked casual and relaxed in a button-down shirt and jeans. And finally, Meghan honored Princess Diana in the loveliest, most subtle way. She wore a watch that was once owned by her father’s beloved mother, and it suited right down to the ground.

The Duchess of Sussex was reading her children’s book in partnership with Brightly Storytime, and explained at the outset of the video that she had written the book, “as a poem for my husband and our son, Archie, and then turned it into a book so you could enjoy it too.” She also read the dedication at the beginning of her book, “To the man and the boy who make my heart go pump pump.”

That wasn’t the only way Meghan honored her family. According to The Daily Mail, she wore on her wrist a $23,000 Cartier watch that had once been owned by Princess Diana, mother to her husband and grandmother to her two children.

Meghan Markle’s Cartier watch was once owned by Princess Diana.

The gold Cartier Tank Française watch was given to Princess Diana as a gift from her own father on her 21st birthday, according to The Mirror. Her oldest son Prince William inherited the watch when she died in a car crash in Paris in 1997, but he reportedly passed it along to Prince Harry. Who clearly passed it along to his own wife. Who may plan to give it to her own daughter, baby Lilibeth “Lili” Diana, someday herself. In 2015, Meghan told Hello!, “I’ve always coveted the Cartier French Tank watch. When I found out Suits had been picked up for our third season — which, at the time, felt like such a milestone — I totally splurged and bought the two-tone version. I had it engraved on the back, ‘To M.M. From M.M.’ and I plan to give it to my daughter one day. That’s what makes pieces special, the connection you have to them."

A connection to Princess Diana, the mother-in-law who passed before Meghan could meet her. That’s a pretty special connection, indeed.