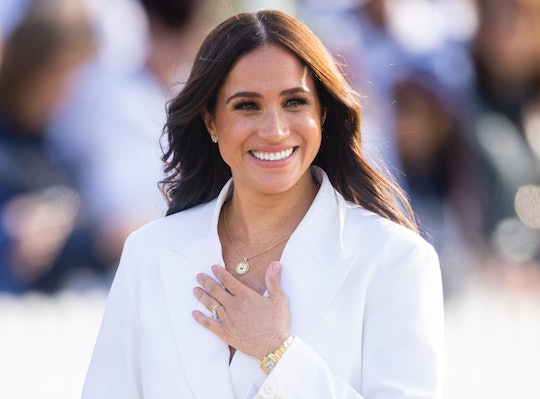 Meghan Markle grew up in the entertainment industry and this clearly informed her world view. Her parents met while on the set of the soap opera General Hospital where mom Doria Ragland was working as an assistant makeup artist and her father Thomas Markle worked as a lighting director. She went on to have an uncredited role on Married! With Children, where her dad worked in later years, and this set her on the path to becoming an actor. A path she would support if her own children followed in her footsteps and chose to become actors as well.

Markle spoke to Variety for a new cover story about her life in Montecito, California with her husband Prince Harry and their two children, 3-year-old Archie and 1-year-old Lilibet. Children whose parents have very different backgrounds. Prince Harry, of course, grew up as the second son to the heir to the throne, while Markle grew up in Los Angeles in the heart of the entertainment industry. And what would she do if her children chose to work in that same industry in 10 or 15 years?

The Duchess of Sussex went on to explain that, as a mom, she just wants her kids to be happy. Although she is aware that her children will have a very different “legacy” to contend with, no matter what job they might choose.

“When you become a parent, you genuinely want your kids to find the things that bring them complete joy. They’re our kids, obviously, and they’re part of a legacy and a tradition and a family that will have other expectations,” Markle shared with Variety. “But I want them to be able to carve out their own path. If it’s the entertainment industry, great. And also, good luck.”

Archie and Lilibet are also in a unique position as members of the royal family and grandchildren of the King of England. Which Markle understands might factor into the way people view them as adults. “There are so many people that will talk about what opened the door for my children,” she told Variety. “But it still takes talent and a lot of grit. We’re creating multidimensional, interesting, kind, creative people. That’s who our kids are.”

Both she and Prince Harry are working hard to ensure their children grow up to become good people. Archie was reminding people to “drive safe” when he was just learning to talk, and Markle takes him with her to deliver food to people experiencing homelessness on their drive home from school. It seems whatever he or his sister decide to do as adults, they’ll approach it with mindfulness. Another trait that runs in the family.