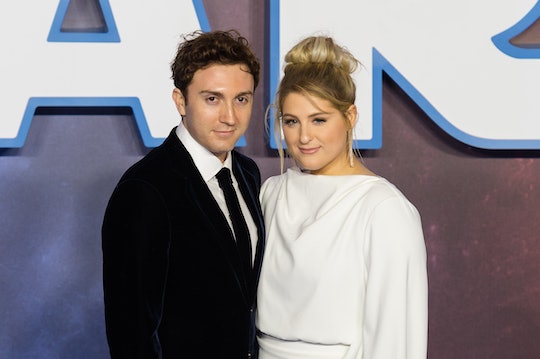 "Maybe this is weird, but mentally I can’t have sex while our son is in between us."

Everyone experiences pregnancy sex differently. Some are fans, some aren't, like Meghan Trainor, who revealed why pregnancy sex just isn't for her right now during a recent interview with TODAY Parents. And kudos for her honesty because there are surely some expectant parents out there who feel seen.

Trainor and her husband, Spy Kids actor Daryl Sabara, are expecting their first child together, a baby boy, in early 2021. And now that the expectant mom is six months along, she admitted that pregnancy sex is not high on her list of priorities.

Trainor, whose debut Christmas albumVery Trainor Christmas was released last month, is certainly not alone in dealing with sex struggles during pregnancy. There are a whole host of reasons why pregnant women can be put off including discomfort, body image issues, fatigue, and a fluctuating sex drive to name a few, as What To Expect explains.

For 26-year-old Trainor, it seems the issue is mostly because of the mental aspect of it all. As she told TODAY Parents, "Maybe this is weird, but mentally I can’t have sex while our son is in between us. All my pregnancy apps say it feels really good. But all I can think about is there's a little boy in my belly."

Meghan Trainor is having a tough time wrapping her head around pregnancy sex.

While the couple, who tied the knot in 2018, might not be tangling up in the sheets a whole lot these days, they are both extremely excited to be first time parents. When Trainor and Sabara announced they were expecting during a virtual interview with Hoda Kotb on TODAY in October, she could barely contain her joy, "We're so excited we couldn't sleep. We've been waiting for so long. I was thinking about who do we tell first and I've told Hoda since I was 19, going to the TODAY show, 'I will have the most babies in the world.'"

She went on to tell Kotb in that interview that she has been amazed by what women's bodies go through during pregnancy. "I do feel like I'm learning new things every single day," she said. "I realized how amazing women are. We're all like, women are superheroes. This is crazy."

More Like This
Meghan Markle Proves Once Again She's Totally Going To Be A Snack Mom
Lauren Conrad Shares Experience With "Lifesaving Reproductive Care" After Ectopic Pregnancy
Ireland Baldwin Shares Her Abortion Story In An Emotional TikTok
Meghan Markle Calls On Men "To Be Vocal" In The Aftermath Of Roe v. Wade Ending