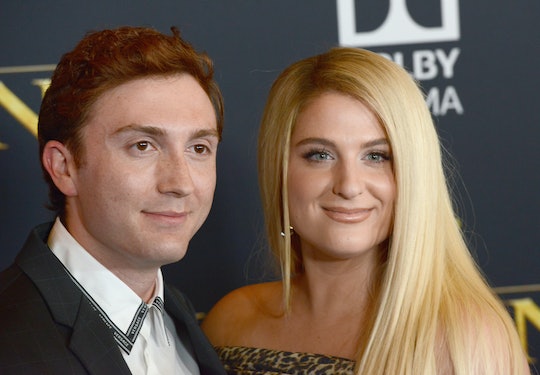 Not long after announcing that she's pregnant with her first child, Meghan Trainor revealed the sex of her baby with all of the new parent excitement and nervousness you might expect.

"I’ve never told anyone,” the mom-to-be told Kelly Clarkson during a preview for an upcoming episode of The Kelly Clarkson Show before revealing that she and her husband Daryl Sabara are expecting a baby boy.

The “All About That Bass” singer shared news with the help of her husband and brother, Ryan Trainor, who held up a blue onesie ornament during their virtual appearance. Trainor, who wore a Christmas sweater, said that she was very surprised when she found out her baby’s sex. “I did all of those ‘look online of like, how fast the heartbeat, where do your hips go’ and I was like ‘oh it must be this’,” she shared. “I was wrong.”

This could be why the singer told Clarkson that she hasn’t bought anything for her son on the way. “I’m just over halfway,” she revealed. “And I just don’t know when to buy stuff!"

While Trainor did not reveal her exact due date with her first child, she did tell Clarkson that she is in need of some help. Luckily the mom of two has plenty of experience to share.

It wasn't too long ago when Trainor announced her big news with a Christmas-themed announcement on Instagram. During an appearance on TODAY in early October, she revealed that she is due early next year.

The singer's festive announcement and holiday sweater for her sex reveal are an obvious nod to her first Christmas album that she's releasing on Oct. 30. Hopefully Trainor will gift fans with more details about her pregnancy when her full appearance on The Kelly Clarkson show airs on Oct. 27.