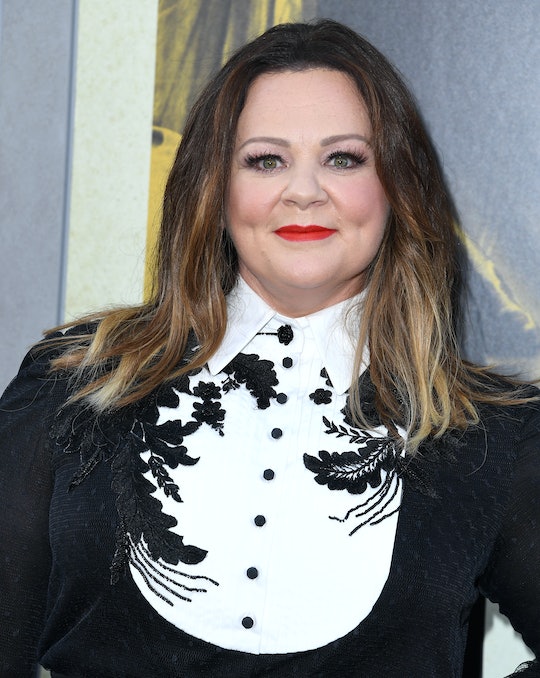 Melissa McCarthy Is Heading Off Teen Rebellion With "Reverse Psychology"

Even when her 11-year-old dyed her hair blue.

What would you say if your child called you up and told you they had dyed their hair blue? If you were Melissa McCarthy, you would say “oh cool!” The Starling actress has her own way of dealing with the little rebellions coming from her two daughters, and it’s called “reverse psychology.” Although she probably shouldn’t have outlined her devious plan on Ellen, because now 14-year-old Vivian and 11-year-old Georgette are going to be on to her.

McCarthy and her husband, actor and writer Ben Falcone, first met when they were part of the same improv group at the Groundlings Theater in 1998. So they really appreciate good comedy bits, wigs, and a dash of dramatic flair. Something their daughters have apparently inherited in abundance. The proud mom told Ellen DeGeneres on Monday that she has a history of encouraging creativity in her kids, no matter how it might look to the outside world.

“Since they were really tiny, I always let them draw on themselves,” McCarthy shared. She’s even been known to get in on the fun every now and again. “I used to do art and draw all up and down their arms when they were, like 18 months, which I found funny,” McCarthy told DeGeneres. “It would be like ‘Ride or die,’ just crazy stuff.”

Melissa McCarthy opened up about dealing with her daughters’ creative efforts.

Now that her daughters are older, they are following in their parents’ footsteps. Oldest daughter Vivian is artistic, while youngest daughter Georgette loves anime. I mean, really loves anime. “She’s taking Japanese lessons. She’s so into anime, she’ll just go upstairs and we’re about to go to school and she comes down and there’s a full band of yellow [across her eyes] and she’s like ‘I’m ready for school.’”

McCarthy’s response to this extreme look (complete with elf ears) is to simply say, “Yeah, alright.” Rather than getting upset, McCarthy’s parenting strategy is to lean in. “If I just keep being like, ‘Do more,’ they’ll get so bored with it.”

Certainly her two daughters seem to know their own minds. Both asked to be in her movie The Boss with Kristen Bell, and Georgette has a well-documented penchant for stunt work. So much so that McCarthy told DeGeneres in 2013 that she bought her daughter a stunt vest when she was just 3 years old.

It sounds like McCarthy’s reverse psychology is working if her daughter has moved from a stunt vest to learning Japanese and coloring her hair blue.