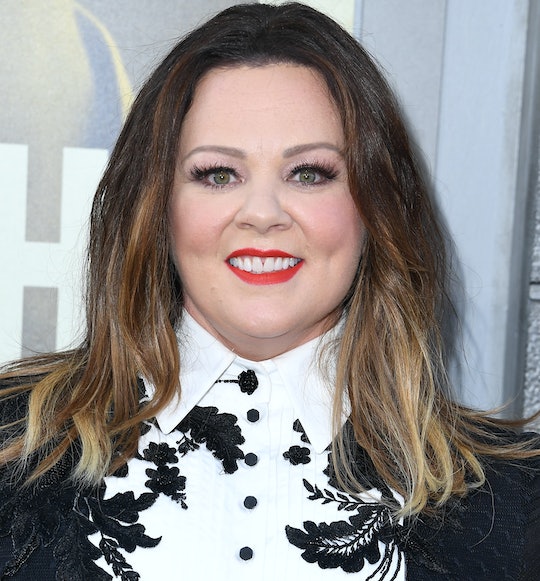 James Taylor once sang that “when you’re down and troubled,” what you really need is a friend. Melissa McCarthy really took that advice to heart when she made a sign for Mariska Hargitay urging drivers to honk for the Law & Order: SVU actress’ speedy recovery from an ankle injury. This, my friends, is what every mom needs to do for her fellow mom friend.

Hargitay, who is a mom to three kids with actor husband Peter Hermann, has been going through it over the past few months. In May, she broke her knee, tore a ligament, and also suffered a hairline fracture that left her using crutches and wearing not one but two casts on her legs. Then, just six weeks later, she managed to injure her right ankle badly enough that she needed surgery.

In an effort to support her friend and buoy her spirits, McCarthy, a mom of two, took to the streets in front of a Weinerschnitzel, holding up a sign for passing cars that read, “Honk if you’re praying for Mariska Hargitay’s recovery!!!” while jumping up and down. She got some honks, so that’s good news.

McCarthy captioned the short video, “If you can’t produce quality care for your friend after ankle surgery, the next best this is obviously standing outside Wienerschnitzel with a sign.”

Her pal Hargitay appreciated the gesture, sharing McCarthy’s video on her own Instagram with the message, “Above and beyond. Honk if you’re blown away by @melissamccarthy’s heart and humor. Might be worth breaking my ankle for,” adding the hashtag #PrayingSheGotMeATakeOutSchnitzel.”

McCarthy’s efforts to console and support her friend despite being an in-demand celebrity and a mom is not just funny, but inspiring. Sure, she and actor husband Ben Falcone might be busy with 14-year-old daughter Vivian and 11-year-old daughter Georgette, but she found time to help a fellow mom out when she’s going through a tough time, ankle-wise. To make her laugh, to make her feel remembered.

It’s exactly the kind of best friend behavior a person could expect from the woman who played Sookie on Gilmore Girls and Megan in Bridesmaids. Life imitating art.