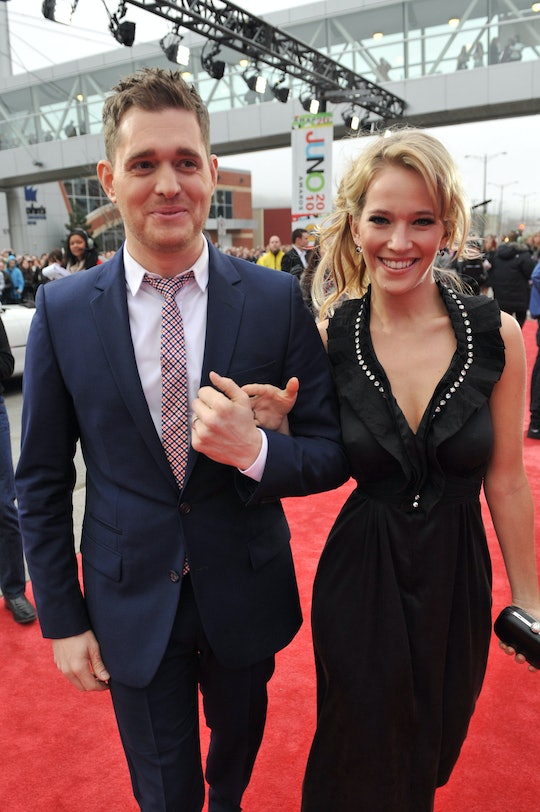 Michael Bublé’s new music video for his song “I’ll Never Not Love You” was more than just a fabulous homage to several romantic comedies we all know and love. It was also a pregnancy announcement! To announce they’re expecting their fourth child, the Canadian singer and his wife, Argentine actress Luisana Lopilato, starred as just about every rom-com couple you can imagine in the video, but they really stuck the ending. As themselves at a grocery store with their three kids... and Lopilato’s baby bump on proud display.

Bublé and Lopilato were the two stars of the video for “I’ll Never Not Love You,” released on Tuesday, playing classic characters like Rick and Ilsa from Casablanca, Jake and Sam from 16 Candles, Buttercup and Wesley from The Princess Bride, and even Jack and Rose from Titanic to name a few. Bublé even recreated the famous scene from Love, Actually when Mark professes his love for Juliet on poster boards while her husband is upstairs.

The catchy song goes through scene after scene from recognizable romantic comedies before it all gets taken apart and he is in a grocery store with his family, including 8-year-old son Noah, 6-year-old son Elias, and 3-year-old daughter Vida. Oh, and Lopilato, walking away smiling with a visible baby bump.

Michael Bublé is going to be a dad of four.

“I love you luisana. Thank you for sharing your incredible talent and supporting me. You are the greatest!!!!” Bublé captioned his post of the video on Instagram. Bublé added on Instagram that this new video is meant to be a follow-up to his 2009 hit song “Haven’t Met You Yet,” which also starred his wife.

Bublé and Lopilato’s new addition is certainly a wonderful moment for their family to celebrate. In 2016, the couple’s oldest son Noah was diagnosed with liver cancer, prompting Bublé to take time away from his career to focus on his son’s treatment. Noah’s cancer has been in remission since 2017, but Bublé told People that the experience changed him dramatically, “I don't wish that kind of pain upon any human being, but I do feel that when you've truly suffered, when you've truly felt fear and loss, it allows you to live a deeper life. Once you've felt those things, you are able, in context, to truly feel joy, gratitude and happiness.”

More Like This
Sarah Levy Revealed She's Pregnant & Got A Very Schitt's Creek Response From Brother Dan
Meghan Markle Made A Sweet Little Tribute To Her Daughter Lilibet
Tan France Reveals The Incredible Care Package Gigi Hadid Sent For Baby Ismail
Ray Liotta Has Died At 67. Not Only Was He An Iconic Actor, He Was A Proud Dad.