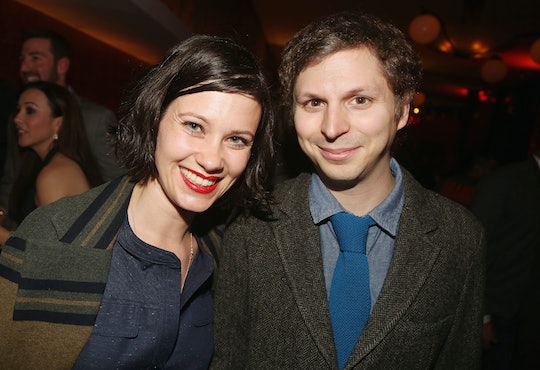 There are some celebrities who are so adept at flying under the radar that their fans hardly know much about their personal lives. Like Michael Cera, for instance. The Superbad star has been working consistently since first starring in Arrested Development in 2003, yet manages to keep his private life incredibly private. Well, he did manage until his Life & Beth co-star Amy Schumer let the cat out of the bag that Cera had welcomed his first child with his wife Nadine. In fact, he became a dad six months ago and no one knew.

Last Friday, Cera and Schumer sat down with Entertainment Tonight for a joint interview when the subject of Schumer’s 2-year-old son Gene, who she shares with husband Chris Fischer, came up. Perhaps in an effort to include Cera in the parenting conversation, Schumer said, “Michael has a baby, too. Is that public knowledge?...I just outed him, I just outed his baby.”

Cera confirmed the news that he and wife Nadine, whose last name the couple has even managed to keep private since reportedly marrying in 2018, are just in the early stages of parenting. “We're right at the beginning of it. We're doing the very basics right now.”

Michael Cera is a dad.

The new dad initially didn’t share any more details about what fatherhood looked like for him, and of course we can imagine he might have had a word or two with Schumer for “outing” him. Schumer does tend to be considerably more open about her parenting and pregnancy journey through social media and her 2020 HBO special Expecting Amy.

Still, it seems she opened the door for Cera to share a little bit more about his baby. During a joint interview with Extra, Cera said “he’s just a little 6 month old baby,” which for a private guy like him felt like a parenting memoir. Cera also added that he had been “shocked” when he watched Schumer’s documentary, “I already had a very strong appreciation … of what women go through, but, you know, you can only have a distant outsider, you know, appreciation for it.”

Now that Cera is a dad of a 6-month-old baby boy himself, name withheld, he probably has a different appreciation for parenthood in general. Oh how far he has come since his George Michael days.