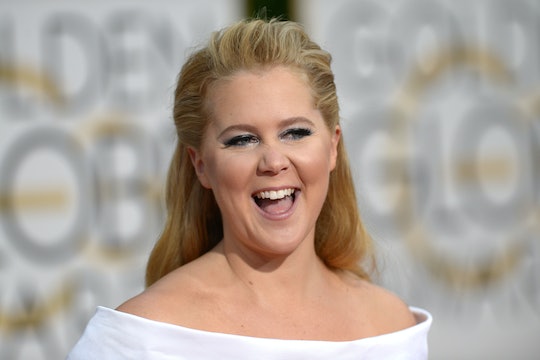 She's been refreshingly honest and transparent about her struggles with pregnancy before, but Amy Schumer's new docuseries Expecting Amy coming to HBO Max this summer will go a bit deeper. The upcoming series will follow the comedian along on her difficult journey — from the moment she learned she was pregnant with her son Gene to the day she gave birth.

Schumer announced on Wednesday, May 13, that Expecting Amy will be coming to HBO Max on July 9. The series comes a little more than a year after Schumer and her husband, professional chef Chris Fischer, welcomed their adorable son Gene in May 2019.

Throughout her pregnancy, Schumer struggled with hyperemisis gravidarum, a severe kind of morning sickness that can cause nausea and vomiting so intense that some women end up dehydrated in the hospital. And this was the case for Schumer, more than once, in fact — all while she was on tour filming her hilarious Netflix stand-up special Growing and trying to go about her daily life.

All of this will be covered in Expecting Amy, a three-part docuseries that follows Schumer from the day she found out she was pregnant with her son right through to his birth. "[Expecting Amy] takes viewers behind-the-scenes as Schumer battles through an extraordinarily difficult pregnancy while documenting the formation of a comedy special," according to Deadline. "... From hospitalizations to going out in front of a crowd of thousands, to quiet moments at home with her family, Schumer shares it all."

As Schumer revealed on Instagram, the series was directed by Alexander Hammer, who also directed Beyoncé’s Homecoming for Netflix.

Schumer's transparency as a mom and a comedian will absolutely make for excellent entertainment. It already has, in fact; over on the Food Network, she and her husband host a quarantine cooking show from their home called Amy Schumer Learns To Cook. And in her Netflix special Growing, for instance, Schumer pointed out that pregnancy doesn't mean "you have to change who you are." "Like, I hate women who start to act really precious," she says in the special. "But you don't stop being you. You don't stop working... or drinking." She was kidding about the last part, of course, but the rest is very true.

Based on the success of Growing, her cooking show, as well as the type unfiltered comedy Schumer's fans have come to love, it seems like Expecting Amy will also be a smash, but perhaps especially with moms.