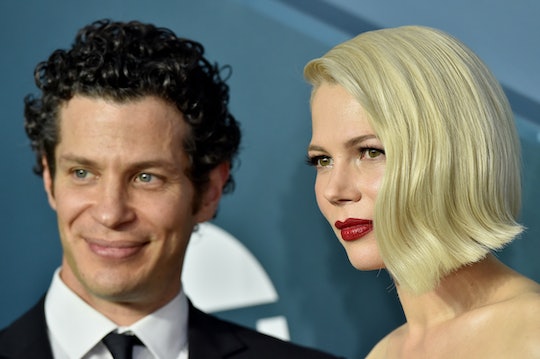 Michelle Williams Is Going To Be A Mom Of 3!

“That good fortune is not lost on me or my family.”

Michelle Williams is going to be a mom three times over. The Fosse/Verdon actress recently announced that she and husband Thomas Kail are expecting another baby together. Williams is already mom to 16-year-old daughter Matilda, who she welcomed in 2005 with the late actor Heath Ledger, along with 2-year-old son Hart with husband Kail.

“It’s totally joyous,” Williams said in an interview with Variety. “As the years go on, you sort of wonder what they might hold for you or not hold for you. It’s exciting to discover that something you want again and again, is available one more time. That good fortune is not lost on me or my family.”

While she didn’t share the baby’s sex or the exact due date, Williams did reveal that her third baby is due in the fall. She also opened up about how motherhood continues to help her be at her most creative. “There’s nothing that makes you committed to a better world than raising a great kid. It’s the ultimate creative act,” Williams said in the same interview. “The most ecstatic moments of life and art are the transcendent ones. Having children is like that. You combine your DNA with someone else to create a new life.”

The Greatest Showman actress, who has long advocated for equal pay for women in Hollywood and beyond, also told Variety that she’s planning on taking a break from acting during her pregnancy. “I wondered if I could work while I was pregnant, but I'm too tired.”

Hopefully she’ll be able to lean on her husband, who she met when they worked together on Fosse/Verdon, as well as 16-year-old daughter Matilda. Indeed, Matilda certainly sounds like a lovely person based on the shout out her mom gave her when she won a 2020 SAG Award. “And Matilda, it's one thing to be completely honest as an actor — it's another thing to be completely honest as a human being,” she said at the time. “And that's just who you are and how you live, and you teach me just by being you.” It bears noting she was pregnant with her son Hart at the time as well, so really the whole family was involved.

Williams might keep her private life under a mom under wraps for the most part, but one thing she can’t quite contain; how much she loves her kids. How exciting to add another baby to the brood.