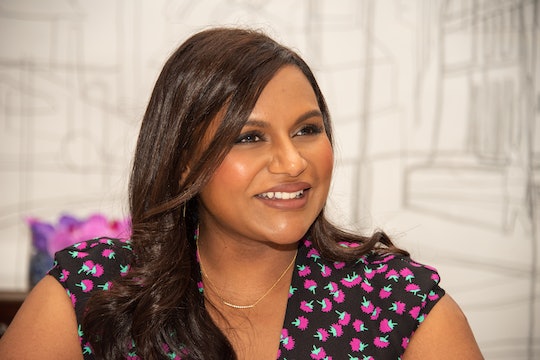 Like so many kids across the country, Mindy Kaling's daughter Kit was watching the inauguration on Jan. 20, glued to the television as President Joe Biden and Vice President Kamala Harris were sworn into office. And like little ones tend to do, young Kit made a comment that moved her mom and proved, once again, that representation matters.

Kaling's 3-year-old daughter, Katherine "Kit" Swati, was at home watching the Inauguration Day broadcast while her mom was at work, as the Late Night star explained in an Instagram post. According to Kaling's post, little Kit got especially excited when she was watching Vice President Harris being sworn in as not only the first woman, but also the first Black woman and first woman of South Asian descent to take that office.

"I was at work, but apparently she said: 'Is that mommy? It looks like mommy.' Best compliment I ever got!" Kaling captioned the photo of her daughter from behind, sitting on the sofa with her hair in a ponytail, watching Harris. "It matters. Happy Inauguration everyone."

The post had other social media users getting emotional about the importance of representation, with one person writing, "Oh how I wished I had someone who 'looked like Mommy' on TV while I was growing up. What an incredible day. Sobbing." Another wrote, "AMEN! Minority women in office."

Kaling has openly supported Harris throughout her campaign all the way back to when she was running to become the Democratic presidential nominee in 2019 when she invited then-Sen. Harris over to make Indian food together. Maybe Kit even had the chance to meet Harris at the time, who knows?

The Mindy Project creator, who is also mom to 5-month-old son Spencer, also explained in October why she was voting with a sweet photo of her snuggling Kit and the message, "#imvotingfor my daughter Kit. I want her to grow up with leaders who think and speak with integrity. Who show that measured and thoughtful responses do not show weakness. I want her to see that her elected leaders can be the children of immigrants, as her mom is."