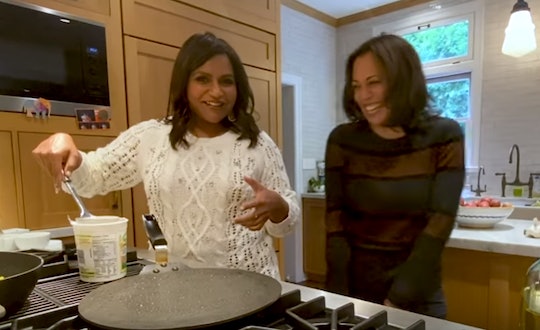 You may not have expected that the legend behind Kelly Kapoor and Dr. Mindy Lahiri would be cooking up a delicious meal with a presidential hopeful, but that's exactly what happened. Recently, Mindy Kaling and Sen. Kamala Harris got together to cook Indian food together and documented it all in one delightful video full of charming banter.

The Mindy Project star has been sharing cooking videos online for some time now, and they lean heavily on the side of charming. Like that time back in June when she shared a quick recipe for Chana Masala and diced her vegetables to a Post Malone song because "dicing is really boring," for instance. Or back in 2018, when she shared some pretty genius tips for baby food prep for her 2-year-old daughter, Katherine "Kit" Kaling.

Now, she's branched out a bit, adding a fascinating guest cook to the mix, Sen. Harris, who tells the Late Night star that she has never cooked dosas, a staple of Indian food, despite her own south Indian heritage. But don't worry, everyone, right out of the gate Harris makes it clear she is game to try whatever Kaling throws her way. Although at one point Kaling does note, "Senator Harris, I say this with respect... you're kind of a show off." Her chopping skills are sort of amazing.

Kaling also notes at the outset of the video that not many people are aware of Harris' Indian heritage (her father is Jamaican and her mother is from southern India). "I find that everywhere I go, whether that's the supermarket or whatever, everyone is like 'You know that Kamala Harris is Indian, right?' We're all so excited about it," Kaling says.

Kaling made it known she was a supporter for Harris' 2020 presidential bid back in June when she told CNN's Jake Tapper, "I really believe in her. I think she's a really exciting candidate, and I like her stances on so many issues that are important to me." Also, according to this new video, they both keep their spices in old Taster's Choice jars, so they have that to bond them now, too.

Although they did almost have a moment when Kaling told Harris she was going to try something "controversial: I put peas and cashews" in her version of the recipe. When Harris paused to take in the changes, Kaling called her out and said, "OK, your silence is damning."

They were laughing though, so it's all fine.

The two went on to discuss the similarities in their upbringing. It seems both of their mothers were "professional immigrants," Kaling's mother was a doctor before she passed away in 2012 and Harris' mother was a cancer researcher and scientist. They shared that their moms would cook for them constantly despite their busy schedules, which instilled a love of food in them both. Harris admitted she has become "hopefully not a snob about food, but I take it very seriously."

There is something deeply intimate about cooking with someone, and that is the greatest takeaway from Kaling and Harris' cooking video. The walls come down, the conversation gets loose and personal... and the food looks great. Watch it three times at least.

More Like This
Neil Patrick Harris & David Burtka Hate Children's Menus — And With Good Reason
Mindy Kaling Is Looking Forward To Sharing The Legendary Kelly Kapoor With Her Daughter
Mindy Kaling Has The Chillest Response To Rumors That B.J. Novak Is Her Kids' Father
Pregnant Chrissy Teigen Cracked A Joke About Trump As She Shared A New Ultrasound Photo