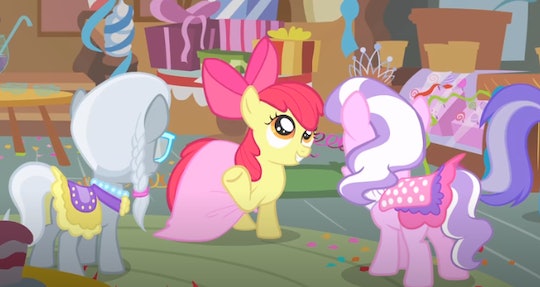 The New My Little Pony Movie Is Coming To Netflix

You don't even have to leave your couch for this one.

Do you know what's better than going to the theater to watch a movie with your kids? Being able to do it from the comfort of your own home where you can load up on snacks and maybe sneak away for a minute or two of me time. Not that you'll want to when the new My Little Pony movie becomes available to stream on Netflix, of course.

The new animated movie featuring the classic My Little Pony gang was produced by Hasbro's Entertainment One studios and originally scheduled to be distributed in theaters by Paramount Pictures in September of this year, but no longer. Variety reported that Netflix bought the rights to the film with the intent of streaming it, although the release date has not yet been announced. Considering the fact that the movie was initially set to be released later this year, My Little Pony will probably be available to stream some time in 2021.

The last time fans saw a movie version of the classic Hasbro toy, My Little Pony, was in 2017 with My Little Pony: The Movie, starring the voices of Emily Blunt, Kristen Chenoweth, Taye Diggs, and Liev Schrieber. That film, which was released in theaters, was based on the popular TV series My Little Pony: Friendship Is Magic, which ran for nine seasons from 2010 to 2019. All of which are available to stream on Netflix, your one-stop My Little Pony shop.

Another 'My Little Pony' movie is coming to Netflix.

Beyond news that My Little Pony will be available on Netflix at some point in the future, not much is known about the new movie. We do know that the new film will introduce some new characters, according to Casey Collins, senior vice president of global consumer products for Entertainment One, who told Kidscreen that these would include an activist pony working to make the pony world a better place.

My Little Pony has been around for almost four decades now. We know we love it, we know we're going to watch it, and now we know we'll be able to watch it on our couch when it comes out. Thanks Netflix!