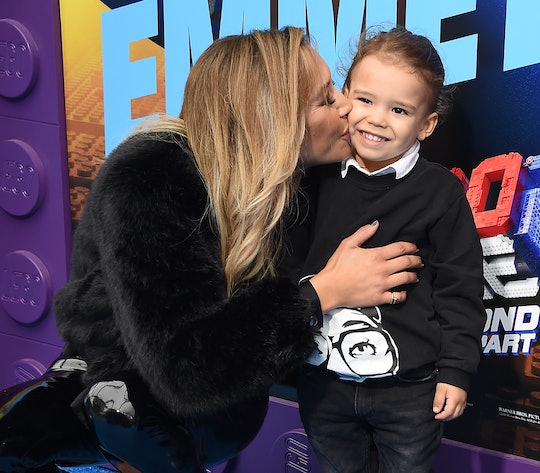 Naya Rivera's 5-Year-Old Son Can Belt Out To Michael Jackson Songs, Just Like Her

Josey is making sure the memory of his mom lives on.

A little more than a year after her tragic drowning death, Naya Rivera’s son, Josey, is keeping his mom’s memory alive. The late actress’ little boy was recently recorded singing a Michael Jackson song, just like his mom often performed on Glee.

In the mid-2000s, it wasn’t uncommon to turn on FOX to watch Glee and find Rivera performing her heart out. During a Season 3 episode, for example, Rivera, who starred on the show as the feisty and loyal singing cheerleader, Santana Lopez, nailed a performance of Jackson’s “Smooth Criminal.” And it’s clear that her talent is living on through her 5-year-old son, Josey.

Josey’s dad, Ryan Dorsey, took to his Instagram Story on Sunday, where he shared videos of Josey strumming on a guitar and singing along to Jackson’s “Man in the Mirror” with a microphone in his hand. “Sunday mood,” he wrote on the video.

Fans took to Twitter to point out just how much Josey resembles the late actress. “Naya would be so proud of him like always,” one fan tweeted. “He’s just like his mom.”

This isn’t the first time that Josey has drawn a comparison to Rivera. Just last year, in fact, Dorsey captured a video of Josey dancing to “Smooth Criminal.” But it only makes sense that Josey would inherit his mom’s talent, especially since she told Us Weekly in 2019 that he was begging to be on TV when he was just 4 years old. “He loves to sing, he loves music, he loves to dance, and he’s really, really funny,” she said at the time.

Who knows? Maybe one day he’ll graduate from performing in his dad’s living room to being broadcast on the TVs in living rooms all across the nation.