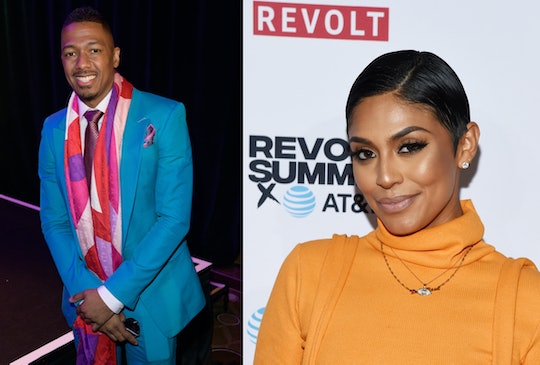 “Welcome to the world Zion Mixolydian Cannon and Zillion Heir Cannon,” De La Rosa captioned the Instagram post announcing their birth on Wednesday, June 16. De La Rosa has deleted all of the other photos on her Instagram feed, letting the video of her cradling her twin boys from a hospital bed take center stage. “#MyWorld #TwinBoys.” And in a photo shared on her Instagram Story, De La Rosa also revealed their nicknames: Zion and Zilly.

Ahead of the arrival of her little boys, the DJ was actively posting to her Instagram Story, updating her followers on the size of her bump and how she was feeling during her pregnancy. “I’m days away from meeting my kings and I still can’t believe I’m having twins!!!,” she wrote in an Instagram Story, two weeks before giving birth. “Not just twins, but GEMINI twins! Their creativity will be out of this world!”

While Zion and Zillion are De La Rosa’s first children, according to Page Six, Cannon already has some experience when it comes to holding two babies at once. He is the proud dad to 10-year-old twins, Monroe and Moroccan Cannon, with ex-wife Mariah Carey. Cannon also has 4-year-old son named Golden “Sagon” Cannon and 6-month-old daughter named Powerful Queen Cannon, with ex-girlfriend, Brittany Bell.

Cannon has not publicly spoken about his relationship with De La Rosa or posted about her on Instagram, but in a now-deleted post on Instagram from April, De La Rosa announced that Cannon is the father of her twins, posing alongside him in a maternity shoot, according to People. “Your Dad & I will always be here for you both; in complete unison and support,” she wrote in the caption of the post.

In an Instagram Story posted in January, De La Rosa gave some insight into her relationship with Cannon. “In 2020, the man who is now my children’s father and I reconnected,” she wrote, according to Us Weekly. “Never would I have ever envisioned where we are now. This isn’t a bs ‘love’ story, it’s a REAL story.”

Twins happen to run in De La Rosa’s family. “My mom’s brothers — aka my Uncles — are identical twins,” she revealed on an Instagram Story earlier this year. “My mom also has numerous sets of twins that run in her family from her aunts to her cousins. I have hella cousins and never would I have imagined I had the twin gene.”

De La Rosa is clearly over the moon now that her little ones are finally here. “Dear babies — thank you for choosing me,” she wrote in an Instagram Story while she was pregnant. “You were created from love. And are already surrounded by so much love. God makes no mistakes.”

More Like This
Nick Cannon Announced The Birth Of His 9th Child, A Daughter Named Onyx
Lifelong Teacher Dr. Jill Biden Loves Watching Abbott Elementary Too
Kanye West Apologizes To Kim Kardashian For The Stress He Caused The Mother Of His Children
Kim Kardashian Stars In Hilarious House Of The Dragon Parody, The Targashians