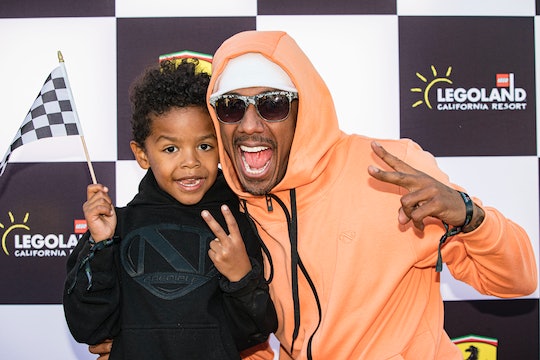 Nick Cannon Is A Proud Dad Of 9, With Two More On The Way

Here’s everything you need to know about Nick Cannon's growing family!

Nick Cannon is an actor, comedian, producer, talk show host, and rapper. But his most rewarding role so far has been a father. Cannon is currently a proud dad of eight children and just recently announced one more is on the way. He surely has his hands full these days, but it sounds like he wouldn’t have it any other way.

“I'm so excited about all my kids,” he told People in May 2022. “Constantly, from every aspect of it. From them getting citizen of the month awards in the first grade to the birth of the new ones. Every day I just wake up excited as a father.”

Back in June, Cannon hinted about expanding his legacy in his future. “Let's just put it this way ... the stork is on the way,” he said during an appearance on Angela Yee's "Lip Service" podcast. And he was not lying! The 41-year-old is preparing to be a dad once again. Cannon is expecting again with Bell and made the announcement in a video on Instagram. This news comes after another bombshell birth, making him a dad of 9 now, with two more on the way!

As Cannon prepares for his family to grow once again, let’s take a look at all of his kids, from the oldest to the youngest.

Moroccan and Monroe are Cannon’s firstborns, with ex-wife, Mariah Carey. Cannon and Carey tied the knot in 2008, separated in 2014, and officially divorced in 2016. Although their relationship is over, Cannon said that his superstar ex is still one of his favorite people, and the two remain friends and devoted co-parents to their children. “We’re doing whatever we can to make sure their upbringing is as healthy as can possibly be and that we’re as healthy as we can possibly be,”Cannon told Variety in a June 2020 interview about their split and current co-parenting. “And that’s where we are to this day.”

Fun fact: Monroe’s name was inspired by the iconic actress Marilyn Monroe and she goes by the nickname “Roe.” Moroccan was named after the Moroccan-inspired decor in Carey's New York City apartment.

Golden Cannon is the first child of Cannon and Bell. The couple welcomed Golden in 2017 and just celebrated his fifth birthday with a Black Panther-themed party back in February of this year.

Powerful Queen Cannon, who turns 2 this winter, was a special Christmas delivery. Cannon and Bell announced her birth in December 2020. Ahead of Powerful Queen's birth, Bell shared photos from a beautiful, underwater maternity shoot featuring her and Cannon on her Instagram. “I usually would keep these to myself but it was so unique, dreamy, and Powerful that I can’t help but share,” she captioned the photos. “One day our little girl (I still can’t believe I’m saying girl!!) will look at these and know it was for her.”

Cannon calls his daughter a genius. In a video shared on Instagram in December 2021, Cannon praised his daughter as she read the words off of flashcards. “Look at this brilliant baby!! They got mad when we named her POWERFUL QUEEN! Y’all lucky I didn’t go with my other choice GENIUS EMPRESS!

His daughter also likes to snap pictures of herself and dad, as Cannon captioned in a few images taken by the tot in an April 2022 Instagram post. “She took these pictures by herself! My Powerful Queen,” he wrote.

Born in June 2021, Zen is Cannon’s late son with Alyssa Scott who passed away in December 2021 from a brain tumor. Cannon openly spoke about his son’s passing on the Nick Cannon Show that same month. “I know so many people out there have experienced the kind of pain and grief that I’m experiencing right now we all know it,” he told his audience. “This is that time so you never know what somebody's going through. Hug your people, hug your family, kiss somebody, tell them you love them. It’s the holidays.”

Cannon told People that Monroe was major support while he was grieving. “My daughter, really, she's so in tune and in line and wise beyond her years,” he said. “I got a lot of therapists, but she's probably my best therapist."

This past June, Cannon and Scott celebrated their son’s memory on what would’ve been his first birthday by announcing their foundation named after him called Zen’s Light. “June 23rd will forever be a day of celebration. A beautiful lighting ceremony to honor the life of an Angel. Zen’s birth has now transformed into ‘Zen’s Light,’” he captioned the June 24 post. “We are proud to announce his new foundation that will help so many others in this world. “Zen’s Light” mission is to foster global excellence in hope, grief-care, and pediatric healthcare for families and children in need.”

Next year, Cannon is planning to host the Lighting Gala which will aid in helping “find a cure for pediatric cancer, further research, and help console more families during difficult times.”

For his heavenly birthday, Scott made a separate post and imagined the reaction her son would’ve had on his special day. “In my mind I can see him smashing his cake and crawling around, tugging at my legs,” she captioned a video holding Zen. “But the reality is I will be the one to blow out his first candle. I will be wishing he was still here with us.”

Cannon and De La Rosa welcomed their now 1-year-old twin boys in June 2021. For their first birthday, the two took the kids to Disneyland, where they had a photo op with Mickey Mouse. “I was told on my 1st birthday I got so excited that I peed all over my birthday cake and I guess the Apple doesn’t fall far from the tree because soon as Zion saw Mickey Mouse he just let loose all over me,” he captioned the moment. “It’s actually happening in this photo!! Piss everywhere! LOL”

Cannon and De La Rosa had dated on and off over the years. When Cannon announced that he and Bell were expecting again, De La Rosa posted an Instagram Story, writing, “Move over Kardashians, Gen ‘C’ taking over babyyyy.”

Legendary Love joined the Cannon clan in July 2022 with Bri Tiesi. “Y’all gonna need a wide screen for this name!!! So grateful to God The Most High Elohim YAWEH for a Healthy, Happy and Harmonious Spirit having a Human Experience!!,” he captioned his Instagram post introducing his newborn son to the world. “aka L.L. COOL CANNONaka L.L.C.aka YOUNG LE-LOaka BROTHER LOVE.”

On Sept. 14, the mega dad welcomed his daughter Onyx Ice Cole Cannon with photographer LaNisha Cole. This is Cole’s first child with Cannon.

“Introducing ONYX ICE COLE CANNON,” he wrote in a lengthy Instagram post. “Once again Today I am in Awe of the Devine Feminine! God has given me and @MissLanishaCole the privilege of hosting an Angel here on earth. I vow to protect, provide, guide and love this child to the best of my abilities."

Cannon called Cole ‘one of the most guileless, peaceful and nonconfrontational kind souls’ he’s ever witnessed and ‘only deserves to revel in this moment of blissful joy of motherhood.’

Is another Cannon child on the way?

The media streets have been talking and it's possible De La Rosa’s newest pregnancy could be with the Cannon. TMZ reported that according to their sources, Cannon and De La Rosa will be welcoming another bundle of joy together this October. De La Rosa has not confirmed that Cannon is the father of her unborn child but he did say it was “safe to bet” that he would be welcoming new additions to his family this year. “You would be safe to bet on three [more children] in 2022,” he told Entertainment Tonight in a July 2022 interview.

It’s clear that being a dad brings Cannon a lot of pride, joy, and purpose. In a 2016 interview with ABC, the actor said fatherhood is what he was "put on this Earth to do." "We're here to be fruitful and multiply," he told the outlet. "That's what our beings are made for, so we can raise our offspring up so they can have offspring, and [have] generations after generations."

This article was originally published on Dec. 28, 2020