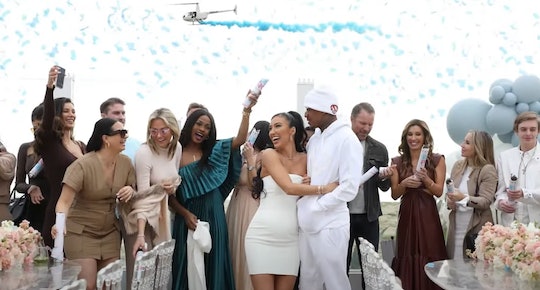 Nick Cannon’s brood is growing by one more. The television host, producer, and actor is about to be a father to his eighth child. Cannon announced that he’s expecting a baby boy with model Bre Tiesi, confirming her pregnancy on The Nick Cannon Show on Monday.

“Everybody knows I have a lot of children,” Cannon said, “and I love them all dearly, sincerely and every single one of my children are just as special as the other.” During the show, he revealed a snapshot of the two at their gender reveal party in Malibu over the weekend.

This baby will be Tiesi’s first and will join its siblings, 10-year-old twins Moroccan and Monroe, whom Cannon shares with ex-wife Mariah Carey; Golden, 4, and Powerful Queen, 1, whom he had with Brittany Bell; and 7-month-old twins, Zion Mixolydian and Zillion Heir, whom he had with Abby De La Rosa. Cannon’s 5-month-old son Zen, whom he welcomed with Alyssa Scott, passed away from brain cancer in December. The actor shared that he knew about Tiesi’s pregnancy before his son’s death but wanted to respect Scott’s grieving process and heal himself as well.

“And it was just one of those things like, you know, I didn’t know what to do. I didn’t know what to say when I was dealing with Zen or to hold off,” he said on his show. “Even right now, that it came out yesterday, that wasn’t planned to talk about it. We wanted to, you know, hold on as long as we can, but it happened. We here and I’m with my family I get to discuss it, I get to be open.”

Last year, Cannon revealed that he planned to stay celibate until 2022 to focus on being a father and building “quality relationships” with his family. “We’re going to see if we can make it to the end of the year,” he said on his show last October. “Somebody said, ‘You should go longer. Take your time!’ We’ll get to the end of the year, then we’ll talk about 2022.”

With another baby boy on the way, the 41-year-old said he is in a great space right now. “At the end of the day when a life comes into this world it’s a celebration,” he said on Monday, “and I’m excited, I’m happy.”