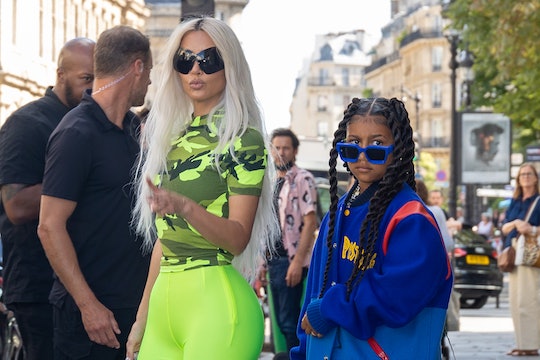 If there’s one thing North West has taught us about herself, it’s that she is not afraid to speak her mind. Or show us how she really feels, especially about the paparazzi. Just recently, in fact, the 9-year-old daughter of Kim Kardashian and Kanye West made a witty remark to the paparazzi waiting to snaps some pics during a recent outing with her mom.

As the pair were leaving a Paris restaurant while in town for Fashion Week, North confronted the paparazzi waiting for them with a solid burn. “Why do you always have to wait for us all of the time?,” North asked, according to reporting from Hollywood Life. “We love you, because you're so famous,” one of the paparazzi responded.

This isn’t the first time North has displayed her annoyance with the constant cameras following her and her family. Back in 2015, when she was just 2 years old, North went viral for yelling “No pictures!” to a bunch of paparazzi who were outside her ballet class to snap photos of her walking with her nanny.

North has long been vocal about what’s on her mind, but especially as she’s gotten older. Just last month, Kardashian shared in the finale of Hulu’s The Kardashians that North shot up a middle finger during a family photo shoot. “Most of the photos I saw were unusable because North was sticking out her middle finger,” Kardashian revealed during a confessional.

North also tends to speak her mind when it comes to fashion. While most might have bitten their tongue, North made it known that she was not feeling the styling choices during a Vogue family photo shoot back in April with her siblings, Saint,6, Chicago, 4, and Psalm, 2. According to her mother, she called the choices boring. “They were all going to wear black,” the SKIMS founder told Ellen DeGeneres. “She walked out and was like, 'This is so boring. I can't believe this is what we're going to wear. I'm going to dress everyone.’ She went into everyone’s closet and picked it all out.”

Kardashian has spoken about her daughter’s opinionated personality several times and has said that she shares a lot of personality traits with her father, rapper Kanye West. “She’s his twin,” Kardashian revealed during an interview on the Honestly podcast with Bari Weiss, adding that her daughter “intimidates” her more than a politician.

There you have it. North may be 9 years old, but she sure seems to have a thick skin needed to handle this tough world!