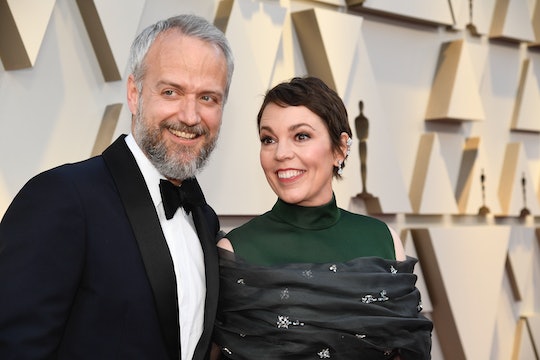 Olivia Colman Once Said As Long As She Has Her Husband & Kids, "Everything Is Alright"

The Lost Daughter actress and Oscar nominee is a proud mother of three children.

Olivia Colman’s unparalleled performance in The Lost Daughter has earned her an Oscar nomination. In the drama, she plays a conflicted mother of adult daughters who has to come to terms with all of the decisions she has made in her past. Colman is always good on-screen, but in The Lost Daughter she connected with mothers who might otherwise feel as though they’re misunderstood. Because she’s a married mom herself, and she clearly just gets it. Although fortunately, her path is not quite so dark as Leda’s. In fact, the story behind her husband and children is quite lovely.

Olivia Colman met her husband Ed Sinclair in the ‘90s.

When Colman was introduced to fellow actor Ed Sinclair at a production of Alan Ayckbourn's Table Manners at Footlights Dramatic Club when they were both studying at Cambridge university in the ‘90s, it was a thunderclap moment. She first thought, “There's the bloke I'm going to marry,” the Broadchurch star previously told The Daily Mail in 2013. “My husband and I were very lucky. We met when we had nothing and we loved each other then. So we were all right.” She added, “We were 20 and he was also an actor. If you meet at that age then you're fine. For me it was thunderbolts straight away.”

She’s been married for more than 20 years.

Colman is just 48 years old, but she and her husband have now been married to each other for more than 20 years. She and Sinclair married in 2001, and since then they’ve gone through a myriad of changes. For instance, Sinclair went from acting to studying law at Cambridge before settling on becoming a writer, according to Hello! Magazine.

They have worked together in the past.

Colman told Yahoo! that she and her husband rarely mix work with home life, but they have worked together in the past. “We worked out very early on that it’s much better if he’s a writer, I’m an actor and we don’t talk about it,” she told the outlet. That being said, she did star in Landscapers for Sky Studios last year, a series her husband wrote. So how did that go? “He tried to give me a note once which went down like a cup of cold sick,” she told Yahoo! So they were clearly on the right path not mixing things up too much.

They welcomed their first child, a son named Finn, in 2005.

Sinclair and Colman are fiercely private about their children. They welcomed their first child, a son named Finn, in 2005. Finn would be around 17 years old now, and there don’t appear to be any photos of him on the internet. We do know this however; during a home tour with Vogue in 2019, Colman revealed that Sinclair had built a treehouse for their children.

Finn became a big brother when Colman and Sinclair welcomed son Hall in 2007. When she won her first BAFTA for her role in Broadchurch in 2014, she and Sinclair made a quick getaway to get back to their two boys. “We were in our socks, drinking tea by 10 o'clock, I couldn't take it all in," she said at the time. "As long as I have Ed and the boys, everything is alright."

Their daughter joined the family in 2015.

When Colman was pregnant for the third time, she was also working on the British mystery series The Night Manager. Something she told Radio Times could be a challenge at times, “I just can’t retain my lines like I normally would. I’ve got a bit of nappy brain going on. There are an awful lot of script changes that happen. It can change the day before, on the day. It fills me with fear: ‘Oh Christ, I’ve barely got the script in my head and now I’ve got to change it.’ So it is a little bit hanging by my fingernails.”

Her pregnancy was written into the series, and she welcomed a daughter (whose name she has not shared) in 2015.

Olivia Colman might be intensely private about her family, but she also seems intensely happy. And that is all that matters in the end.

More Like This
Kate Middleton Explains Why Her Kids Couldn't Attend The Top Gun: Maverick Premiere
20 Memorial Day Movies To Watch As A Family This Year
Ray Liotta Has Died At 67. Not Only Was He An Iconic Actor, He Was A Proud Dad.
Sarah Levy Revealed She's Pregnant & Got A Very Schitt's Creek Response From Brother Dan