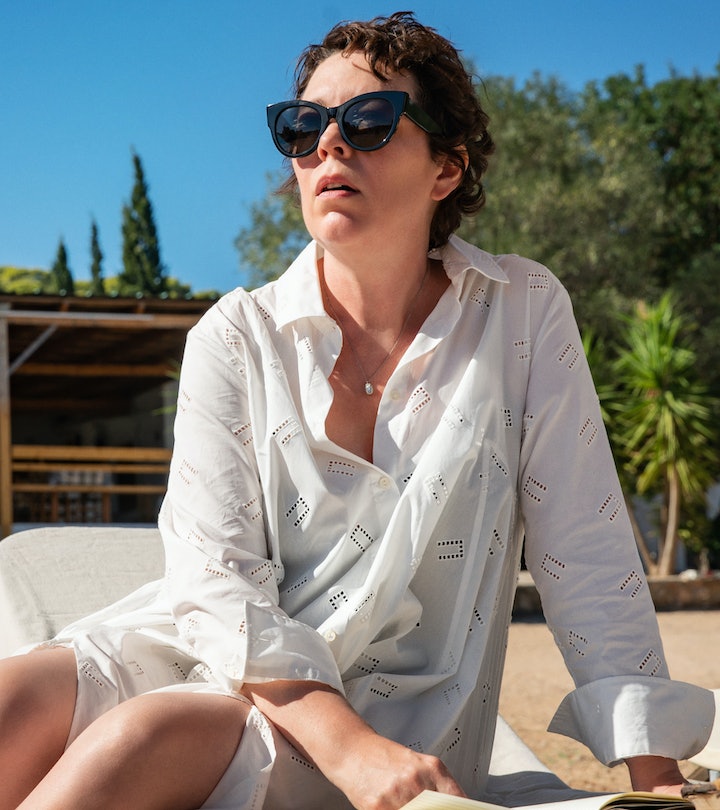 That’s me someday, I always thought. When I’m done. When they’re grown and I’ve finished.

Picture it: Silence. A beach. A woman with excellent sunglasses lounges on her back with an ice cream treat. She is wearing a caftan over tasteful black maillot. A kicky short haircut. She is the picture of perfect solitude, reading. Sleeping. Swimming. Staying on a Greek island in a small apartment that looks out over the sea, a lighthouse in the distance. Leda in The Lost Daughter on Netflix eats what she wants, walks when she wants. Shops in little kiosks for bits and bobs when she feels like it. Her limbs are hers to move about freely, an impossible dream for Nina, a young mom on the beach with her daughter, who is still deep in the weeds of new motherhood.

I was Nina, once, on a beach less glamorous. Swimming alongside four little boys or standing in the sand while they buried my feet or trying to write in a journal while they stood over me, their shadows long, wet hair dripping on the pages. They needed more food, more toys, more of me, always more and more of me. I had my own Leda then too: a middle aged woman who rode her bike to the beach in a sturdy swimsuit and oversized button-down shirt, a towel and a book and sometimes an apple in her basket. She swam with long, sure strokes as the sun went down. She read sometimes but not always. She got to change her mind whenever she wanted.

That’s me someday, I always thought. When I’m done. When they’re grown and I’ve finished.

This is the lie we tell ourselves. That we will ever finish. Ask Leda, sitting on that beach in Greece but really not there at all. Leda is back in her living room with her two little girls, Bianca and Marta. They want more and more of her and she is getting smaller and smaller until Bianca slaps her across the face to get her attention. Slaps her like it’s nothing. Slaps her because she owns her. Leda yells, she slams the door. And yes okay, now she is on a beach in Greece but she is not. She is still slamming that door and yelling and having to look her frightened daughter in the eye again and again. You can hear how she’s there in the way she barely speaks.

Leda left her daughters and that living room for three years. She left and she tells young Nina it was “amazing.” But she didn’t really leave.

Does Bianca own her mother? Do our children own us? In that moment, in that living room, it feels like they own us. They are eight feet tall. They tower over us. Especially when they are so so small. When ten minutes alone feels like a spa holiday. When a night in a hotel room in a clean bed with a glass of wine is a mirage, terrifying because of how much better it can feel than being with them. We see Leda as a young mother, getting away to a conference. Being seen, listened to. Loving her children more now that she’s away from them than she could when she is in that living room, peeling orange after orange. A sweet inside joke turned sour by overuse.

Leda left her daughters and that living room for three years. She left and she tells young Nina it was “amazing.” But she didn’t really leave. Lyle, the landlord of her lovely little apartment in Greece, he left. He left his kids for good. He’s fine with it. And what’s more, the world is fine with it. But not Leda.

Now she is 48 years old. Young enough to really do some living. Her feet are dancing, her mouth is smiling, this was meant to be her time. She is 48 with two grown daughters. She speaks to them on the phone, she invites them in to her little vacation story. Because like so many moms, she was no one except their person for so many years. That’s who everyone wanted her to be, even her lover. When she admitted that she hated talking to her kids on the phone, he was disappointed in her. “Don’t say that,” he said. And so she took it back.

Now her girls are grown, and we get the impression that she is still sort of no one. Except this time without them as her anchor, her purpose, her reason.

She is not a mother; she was a mother. No longer of use, no longer a present tense anything. She is past tense important, her value in who she raised not who she is.

Same. I don’t have a story without my boys. Everything is in relation to them. Someone’s age, someone’s hair color. Leda does the same; she left her daughters but everything comes back to them.

What I am learning is that I don’t want to be out of that living room completely.

Like Leda, I had my kids young. I was 21 years old when I had my first. Like Leda, I lived in that living room. Game after game of Trouble, of blanket forts, of “Watch me! WATCH ME!!”

Like Leda I played the games but on that carpet in that living room I was picturing the life I live now. A 49-year-old woman, packing for a trip to Paris. My limbs free to swing wherever I want them to go. Eating ice cream on a beach.

Like Leda, I didn’t know that I wouldn’t matter so much anymore. That all of me would be past tense. I didn’t know I would be erased, that the fellowship of motherhood would end. That I would keep trying to wedge myself into parenting conversations with younger moms, my knowing smile like Leda’s, my empathy, but my voice couldn’t get it right. They are still in that living room and I got out or they think I got out. They are busy, so busy, and my stories are old, so old. They have their own community, their own moms. I’ve aged out of the system.

What I am learning is that I don’t want to be out of that living room completely. That I’m just going to have to find a way to be that mom and this mom and marry them in my body so I can move forward. After all, Leda and I are sort of lucky now.

We get to go to Greece. Or Paris. We get to eat ice cream on the beach. It’s not nothing.