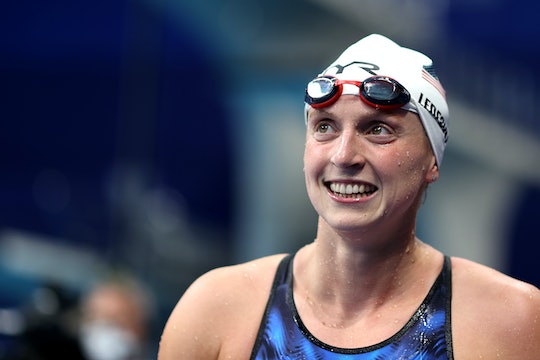 “I might have some parents coming after me for this.”

We’ve probably all been there. You take the kids for a “relaxing” day at the beach that ends up being exhausting. You get a tiny break when they eat and when they want to head right back into the water, you still just need another minute to collect yourself. Then you remember the old rule. No swimming after eating for 30 minutes or whatever. Blessed extra time to relax. Well, Olympic swimmer Katie Ledecky has officially debunked that rule we’ve never questioned, but that doesn’t mean we have to tell the kids. For now, at least.

After winning two gold medals, a silver, and a bronze at the Tokyo Olympics, Ledecky has weighed in the beloved myth that parents have kept alive for more than 100 years. In an interview on The Tonight Show, host Jimmy Fallon (who is also a parent so I don’t know what he was thinking) asked Ledecky about the no swimming for 30 minutes rule.

“Can you eat before you go in the pool? Or do you have to wait 30 minutes? Is that real?” Fallon asked. “Let’s get to it. I want a real fact here.”

Fallon was referring to an old rule about staying out of the water for at least 30 minutes after you eat that first cropped up in a Boy Scout handbook from 1908, as The New York Daily News reported. Back then, the boys were told that if they didn’t wait at least 90 minutes to swim after they ate they could drown and “it would be your own fault.” The rule stuck, with parents believing that children could get cramps if they swam after they ate, despite a 2011 review from the American Red Cross that read, “Currently available information suggests that eating before swimming is not a contributing risk for drowning and can be dismissed as a myth.”

Katie Ledecky is out here ruining parents’ time at the beach.

Then came Katie Ledecky, Olympic superstar swimmer, here to end a 100-year-old tradition. “I might have some parents coming after me for this,” Ledecky told the talk show host. “I think we can debunk the myth.”

“You can eat before you swim,” she said. “I wouldn’t recommend you go out and eat a huge pizza with your daughters before you swim. But I eat granola bars before I swim, within five to 10 minutes of a race. I drink chocolate milk after I swim.”

Fortunately most children are in bed before The Tonight Show airs, so we might be able to keep this myth going awhile longer. I won’t tell if you don’t.