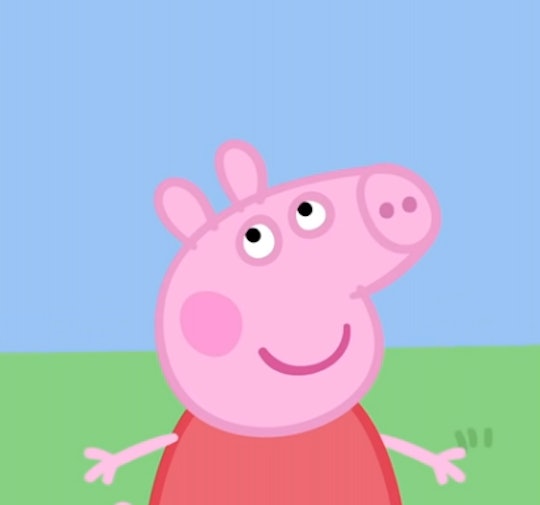 (And she might just be coming to your town!)

The saucy little pig who inspired your child to start speaking in a British accent is crossing the pond to come and play! From March 16 to May 21, 2022, Peppa Pig (in puppet form) will appear in the live show Peppa Pig Live! Peppa Pig’s Adventure, presented by Round Room Live and Hasbro. The show will visit 40 cities from Texas to Vermont, including Atlanta, Orlando, Detroit, and Boston, and Romper has an exclusive first look!

In this new, 60-minute musical show, Peppa, her brother George, and her friends — including Pedro Pony, Suzy Sheep and Gerald Giraffe — are embarking on an exciting camping trip in the woods. With Daddy Pig driving the bus, Peppa and friends know that there’s sure to be lots of singing, games, adventure, and surprises in store.

“We can’t wait to bring this delightful and captivating show, featuring such beloved characters, to audiences across the country,” says Stephen Shaw, tour producer and co-president of Round Room Live. “We’re proud to offer the most engaging and memorable family experiences for live entertainment fans of all ages.”

In this exclusive clip, the cast sings “Today is the Day” — a fun-loving track about the excitement of getting ready for their school camping trip. Colorful puppets of your child’s favorite characters glide across the stage in this playful sing-along.

Peppa’s first trip to the U.S. was in 2005, when the little piglet was re-dubbed with an American accent for Cartoon Network’s Tickle-U preschool programming block. Since 2008, however, when the show moved to Noggin and then Nick Jr., Peppa has always had the lilting English accent we all know and love. The character has become extremely popular, not just in the UK and U.S. but all over the world. Peppa-themed play areas can be found in the UK, China, and the Netherlands, as well as in Texas and Michigan. On Feb. 24 of this year, the Peppa Pig Theme Park will open in Florida, right next to Florida’s Legoland.

Tour dates, tickets, and full details for Peppa Pig Live! Peppa Pig’s Adventure can be found by visiting the show’s official website. The show will begin its U.S. run in San Antonio, Texas on March 16, 2022 and end May 21 in Rutland, Vermont. Tickets are on sale now.

More Like This
Elmo Talks About Getting His Covid Vaccine In A Cute New Video
'Caillou' Is Officially Getting A CGI Reboot Whether People Like It Or Not
Lyle, Lyle, Crocodile Is Heading To The Big Screen As A Musical Comedy
Sea Monsters, Pandas & Everything Else Coming To Netflix In July 2022 For Families