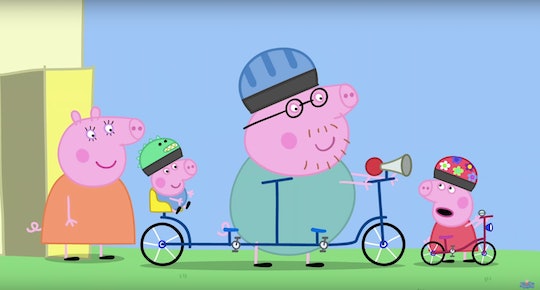 If Your Toddler Is Obsessed With Peppa Pig, Science Has A Sweet Explanation *Snort*

If you have had a child under the age of about 5 at some point in the last decade, you are more than likely familiar with the toddler television phenomenon that is Peppa Pig. The delightfully giddy, red-dress-wearing pig with an English accent that sounds preciously proper to most American ears has graced television screens across the world since 2004. With such staying power, the question begs to be asked — Just why do toddlers love Peppa Pig so much?

While neither of my own boys have been particularly obsessed with the show, we have seen our fair share of episodes, and I have plenty of friends and co-workers whose toddlers can't get enough Peppa Pig. Toddlers are especially delighted when the show flashes across screens big and small.

The most obvious difference between Peppa Pig and other shows that American toddlers watch is the British accent. It's decidedly adorable, but that's not what makes Peppa so appealing to children, according to show producer Phil Davies in an interview with Ben Beaumont-Thomas for The Guardian. He said that using a child for the voice of Peppa Pig makes the character organically relatable. "Four-year-olds make wonderful mistakes and mispronounce words."

So basically your child is hearing a version of themselves when they listen to Peppa speak. This makes total sense as to why any toddler might be more interested in what Peppa has to say than listening to mom or dad who most definitely sound like full-on grown ups. Not to worry though — if your child is hanging on every joyfully-accented word, they may actually be learning some important social cues and valuable lessons about relationships in the process.

Parents weighing in on Quora about the appeal of Peppa Pig seem to agree that the focus on animal characters living as a human family would generate a connection between adorably lovable animals that children already love and the human counterparts (i.e., family members) that they interact with in their own lives. And the show is sneaky about this when it comes to teaching life lessons to kids. The characters interacting on screen explore interpersonal relationships in an accessible way that make it easy for children to understand. I mean, what kid doesn’t want to learn about family dynamics from a cartoon pig?

The story lines typically follow Peppa and her family members through daily activities. Simple childhood acts like playing dress-up or reciting nursery rhymes that are shown on screen are often similar to what the toddlers watching are doing in their everyday lives. So when Peppa jumps in a mud puddle just like they did last Saturday after it rained all morning, children see a bit of themselves on screen. It's the same reason moms love watching characters on shows like Working Moms who hilariously depict scenes like what it's really like to have to use a breast pump in an office. (Spoiler alert — it's not glamorous.) We see ourselves on screen and instantly relate.

Another reason toddlers get sucked into each episode has to do with the way that it's created. The animation uses simple lines and shapes with bright, bold colors, making them ideal for toddlers to enjoy. The reason this type of animation is so attractive to young children has to do with the stage of development that they are currently in.

In a recent interview with Romper, Maureen Healy, child wellness expert and author of The Emotionally Healthy Child, explains this phenomenon. "Since a child’s brain is rapidly developing, they tend to be drawn to simple shapes early-on. As they grow and develop cognitively they can begin processing more complexities including shapes, sounds, and other input," she says.

In an article for Scholastic's website, former early childhood professor and author Ellen Booth Church explained that identifying shapes and colors are an important part of childhood development. “When your child explores different shapes, she is using one of the most basic educational processes; the observation of same and different. This concept provides her with a basic process that she will be able to use in observing, comparing, and discussing all she sees and encounters,” she said.

This type of eye-catching design is right in a toddler's wheelhouse developmentally. Combining that with simple, easy-to-follow story lines and charming accents makes Peppa Pig entertaining and educational.

Personally, I'm not super entertained by watching a cartoon pig wearing a red dress jump in a muddy puddle, but if you need a quick break from your busy toddler, you can count on the relatable story lines and colorful animation of Peppa Pig to hold that little one's attention for as long as it takes to brew and steep a hot cup of tea. That's certainly worth keeping a few episodes queued up on the telly.

More Like This
There's A Good Reason Why Your Baby Is So In Love With CoComelon
Take An Exclusive Sneak Peek At 'Bluey' Season 3 Before It Lands On Disney+
What Age Do Kids Start School? Here’s What You Need To Know
Bindi Irwin Reveals Her Daughter Carries This Random Item Everywhere "Just In Case"