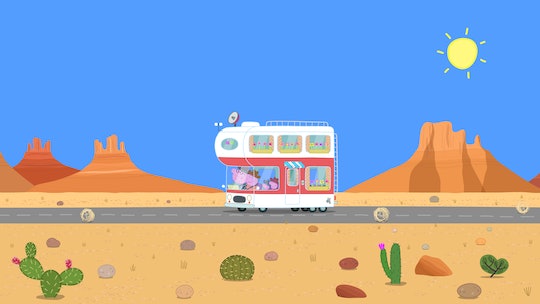 Peppa Pig Is Finally Coming To America, This Is Not A Drill

And she's traveling by motorhome and stopping to eat eggs at a diner. Yes, the American dream.

Who would've thought Peppa Pig, Mummy Pig, Daddy Pig, and George Pig would all make a trek across the pond? In a four-part Peppa Pig special on Nickelodeon, the sassy little pig from the United Kingdom is finally coming to America, traveling around in a motorhome, eating at a diner, and basically living the American dream.

The new limited series airs on March 5 on Nickelodeon at 8 a.m. EST, and the story is a great one. Peppa, Mummy, Daddy, and her little brother George are coming to America to film a movie in Hollywood. The movie is called Vegetables In Space, and it stars Super Potato and Hash Brown battling carrots who want to take over the moon. The whole Pig family stars in the film, all wearing broccoli costumes.

As exciting as the film might be, Peppa Pig's adventures in America start long before she heads to Hollywood to make it big. The family starts out in New York City, where they take off in a motorhome to drive across the country to check out all of the most recognizable spots in the United States. In New York City, in the first episode, they visit the Empire State building and check out the lights in Times Square.

Episode 2 sees some excitement down south, where Peppa Pig's family eat over-easy eggs at a traditional diner before they go to a barn dance and then stop by a Monster Truck rally in short order, while the third episode has them visiting the Grand Canyon by helicopter and meeting Mr. Buffalo and Mr. Bison on their drive through the desert. When Peppa finally makes it to Hollywood, they got lost (in perhaps the most relatable of moments) on the freeway. Eventually they find their way by following the Hollywood Walk Of Fame to their destination.

Peppa's arrival in the United States will be good news for all of those American toddlers who have picked up on her British accent after hours of watching Peppa Pig. Maybe now that the entire Pig family will be spending some time on American soil, they might enjoy hearing something more like their own accents represented.

Or even better, maybe Peppa and her family will adopt American accents themselves through osmosis. We shall all have to wait until Mar. 5 at 8 a.m. EST to find out on Nickelodeon.