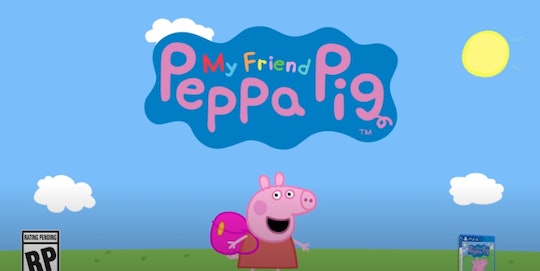 A Peppa Pig Video Game Is Coming Out This Fall

Peppa is just as sassy in video game form.

My Friend Peppa Pig, a new video game featuring everyone’s favorite sassy little piggy gal, is coming out soon. And judging from the trailer that was recently released by Playstation, Peppa is going to bring along her “new friend,” aka whoever is playing the game, to a whole bunch of different locations to play and hang out and interact with the whole gang. Also Peppa manages to throw some shade at Daddy Pig in the one-minute trailer, so you know this video game is legit.

So here is what little Peppa Pig fans, and big Peppa fans too for that matter, can expect from the new video game. Players will be able to create and dress their own avatar to dive into Peppa’s world, where they will go on adventures to the beach, to snowy mountains, Potato City, and of course everyone’s favorite, Peppa’s very own house. The player gets to decide which adventure they might like to go on. An we’ll tell you this, our first order of business will be helping Daddy Pig find his glasses. Peppa really hassles her poor father, so much so that she even makes fun of him in the trailer for the video game when he asks her who her new friend is, “I don’t know. They’re new... silly.” As we can see, she’s still sassy as ever.

My Friend Peppa Pig will be available in 13 languages including English, Spanish, French, and Italian on Oct. 22, 2021 on Nintendo Switch, PlayStation, Xbox, and PC Digital for $39.99. You can preorder it on Amazon now.

Peppa Pig is sassy as ever in her new video game.

The video game will give players the chance to try out multiple adventures, like playing with Mummy Pig and little brother George at Peppa’s house, jumping in muddy puddles together, and even create their own unique story along with all of Peppa’s other friends.

Terry Malham, CEO of Outright Games who created My Friend Peppa Pig, told Collider, “Peppa Pig is a global smash hit and we’re so excited to bring this world to life in a brand-new console video game. This is a game for all young children and their parents to enjoy together, exploring Peppa’s world in this brand-new adventure, and we couldn’t be more excited for it to release this Autumn.”