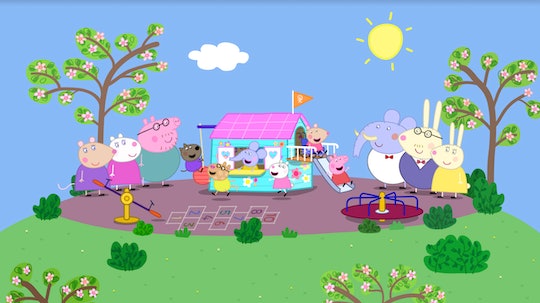 “Everything is children sized” in Peppa’s Club!

Has your child seen every single episode of Peppa Pig multiple times? Good news for them (and, by extension, you)! A brand new, four-part Peppa Pig special, Peppa’s Club, will premiere on Nickelodeon on Monday, May 30 at 11 a.m. EST, and Romper has an exclusive sneak peek!

In the new special, Mr. Bull builds a new, kid-sized, kids only clubhouse. So when it comes to the playground, Peppa and her friends have a new place to plan adventures, learn new things, and play pretend. From detectives to shopkeepers to assistant zookeepers, there’s nothing the kids can’t be, no adventure they can’t dream up, and no fun they can’t imagine for themselves! (And they might just help a few grown-ups while they’re at it.

In Romper’s exclusive clip from Peppa’s Club below, we can get a sneak peek of Peppa’s lovely new clubhouse — complete with swing, slide, and pretend kitchen! “Everything is children sized!” Peppa excitedly says in the clip.

Check out our exclusive peek at Peppa’s Club.

Peppa Pig premiered in the United States in 2005, and has been charming preschoolers with Peppa’s lilting English accent ever since. The character has become extremely popular not just in the UK and U.S. but all over the world; the series is available in 180 countries where Peppa, George, Mummy and Daddy Pig, and their friends help preschoolers explore and understand their own world. Peppa-themed play areas can be found in the UK, China, and the Netherlands, as well as in Texas, Michigan, and Chicago.

The past year has been a big one for Peppa stateside; on Feb. 24, the Peppa Pig Theme Park opened in Florida, right next to Florida’s Legoland. And on May 21, she closed out a two-month U.S. tour of the live show Peppa Pig Live! Peppa Pig’s Adventure.

And now there’s even more of Peppa’s world to look forward to with this brand new special.

Peppa’s Club will premiere on Nickelodeon on Monday, May 30 at 11 a.m. EST.

More Like This
'Caillou' Is Officially Getting A CGI Reboot Whether People Like It Or Not
Elmo Talks About Getting His Covid Vaccine In A Cute New Video
Lyle, Lyle, Crocodile Is Heading To The Big Screen As A Musical Comedy
Sea Monsters, Pandas & Everything Else Coming To Netflix In July 2022 For Families