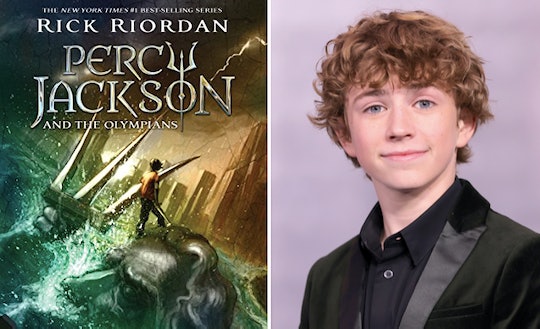 Here’s everything we know so far.

It’s been almost a decade since fans have seen Percy Jackson onscreen, and Disney+ is about to change all that. Not only is Percy Jackson coming to Disney+, but he and his fellow Olympians are going to be getting their own series on the streaming platform. So here’s everything we know so far.

The author behind Percy Jackson and the Olympians is writing the series.

The 2010 movie Percy Jackson and the Olympians: The Lightning Thief and its 2013 sequel, Percy Jackson and the Olympians: Sea of Monsters were both based on young adult books written by Rick Riordan. Those books, set in the mid-2000s, told the story of a young boy named Percy who discovers he is a demigod son of Poseidon (meaning he was the child of a human and a Greek god). He also finds that there are other demigods like him who attend a training camp in Long Island called Camp Half-Blood, which is where he meets his fellow Olympians, all of whom have special powers and join him on his adventures.

Riordan is writing the new series coming to Disney+ alongside Jon Steinberg (Black Sails). James Bobin, who directed The Muppets, will direct the series, per Entertainment Weekly.

What will the Disney+ series be about?

While the plot of the first episode has yet to be revealed, the first book in the Percy Jackson series is Percy Jackson and the Olympians: The Lightning Thief, which sees Percy and his friends going on a quest to clear his name after Zeus accuses him of stealing his lightning bolt. So it’s quite possible the series could dive into that storyline.

If you happened to see The Adam Project on Netflix starring Ryan Reynolds and Jennifer Garner, you might recognize the young actor who has been pegged to play Percy Jackson in the new series. On April 11, Variety reported that Walker Scobell, who played young Adam in the Netflix movie, has been chosen to play the young demigod for the Disney+ series.

“We were fortunate enough to audition Walker months before that movie came out, but the film only confirmed what we already knew about his talent,” Riordan shared on his website. “It was obvious to me and the rest of the team that Walker had the perfect mix of comedic timing, sweetness, rebelliousness, snark and heroism to embody our hero Percy Jackson.”

While no other cast members have yet to be announced, Riordan confirmed with Entertainment Weekly that they are closing in on casting the other two leads, Annabeth and Grover.

When is the Percy Jackson Disney+ premiere date?

While Disney+ gave the order for the new Percy Jackson series in January 2022, there’s no word as of yet on when it is expected to hit the streaming service.

As you wait for the new Percy Jackson series to come to Disney+, you can watch both of the film adaptations, which starred Logan Lerman as Percy, Brandon T. Jackson as Grover, and Alexandra Daddario as Annabeth. You can also visit Riordan’s website for Camp Half-Blood quizzes, games, and more information about the upcoming series.