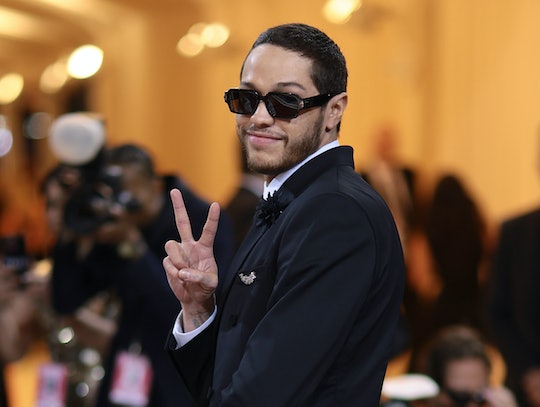 Pete Davidson Reveals He Can't Wait To Be A Dad One Day: "That’s, Like, My Dream"

“It’s, like, super corny, but it … would be so fun to dress up the little dude.”

Pete Davidson has lived a pretty full life in his 26 years on this planet. He was a cast member on Saturday Night Live for several seasons, he’s been in movies, he’s dated some of the biggest celebrities on the planet including his current girlfriend, a little known celebrity named Kim Kardashian. But there’s one dream he has yet to fulfill. His biggest dream, in fact. Pete Davidson revealed recently that he just really wants to be a dad.

In an interview on the second season of Hart to Heart with Kevin Hart on Peacock, Davidson opened up about his dream of becoming a father. “My favorite thing ever, which I have yet to achieve is, I wanna have a kid. That’s, like, my dream,” he told Kevin Hart in a clip from the interview. “It’s, like, super corny, but it … would be so fun to dress up the little dude.” He went on to say, “That’s kind of what I’m just preparing for now, is just trying to be as good as a dude and develop and get better so when that happens it’s just easier.”

The comedian also opened up about his own childhood in the interview, admitting that it “wasn’t great,” and talking about losing his dad as a young boy. Davidson’s dad Scott was a firefighter who died during the 9/11 terrorist attack when he was 7 years old.

Certainly Davidson appears to be a hands-on guy with kids as evidenced by his time with Kardashian’s four children, 9-year-old daughter North, 6-year-old son Saint, 4-year-old daughter Chicago, and 3-year-old son Psalm. He met the kids after he and the Skims mogul had been dating for six months, she told TODAY, a marker she stuck to after her separation from Kanye West. “I definitely wanted to wait six months and that was the marker. It’s different for everyone and different things work for different people,” Kardashian shared at the time. “But you just have to do what feels right and try to just be as respectful and cautious as possible.”

Davidson has since been seen shopping at Target with Saint, going for drive in a pink golf cart with North to deliver pizza to Scott Disick, and even appeared to have their initials tattooed on his neck. He might not yet have his own “little dude” to dress up and hang out with, but he certainly seems to be making a big impact on the lives of his girlfriend’s children. And that’s saying something.