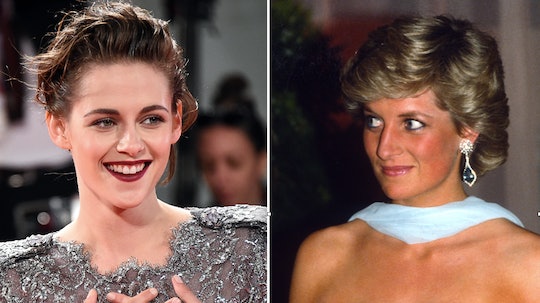 Prepare to do a double-take.

A famous woman playing another famous woman is always a risky game. Particularly when the woman being portrayed was arguably one of the most photographed women in the world during her lifetime. But one look at this photo of Kristen Stewart as Princess Diana from the biopic Spencer should calm anyone's fears. Because she manages to not simply look like the late Princess of Wales, but also embodies her spirit.

In June, Deadline first reported that the Twilight actress had been chosen to play Princess Diana in the Pablo Larraín biopic Spencer. The time period covered in the film reportedly happens over the course of one of the Princess of Wales' last Christmas weekends at Queen Elizabeth's Sandringham estate in the early '90s, when she decides to leave her marriage to Prince Charles and reject royal life.

At the time, Larraín's decision to cast Stewart in the role of Princess Diana might not have seemed obvious as she is American and, of course, the Princess of Wales was a member of the British monarchy. But the director stood by his decision. "Kristen is one of the great actors around today," Larraín explained to Deadline. "To do this well, you need something very important in film, which is mystery. Kristen can be many things, and she can be very mysterious and very fragile an ultimately very strong as well, which is what we need."

"The combination of those elements made me think of her," Larraín added in the same interview. "The way she responded to the script and how she is approaching the character, it’s very beautiful to see. I think she’s going to do something stunning and intriguing at the same time. She is this force of nature."

On Jan. 27, NEON films, the distributor of Spencer, released the first photo of Stewart as the Princess of Wales. And get ready, because it will truly give you chills.

Kristen Stewart is a dead ringer for Princess Diana in new photo from biopic 'Spencer.'

Social media users were quick to note how much Stewart looked like the late Princess, tweeting messages like, "This is a remarkable resemblance to Diana, wow," and this person who was taken aback by the similarity, "That really took me a second, to see that was Kristen Stewart in the photo and not Diana."

In October, Stewart opened up to her Happiest Season director Clea DuVall for an interview with InStyle about playing Princess Diana. She explained that the accent was "intimidating as hell" and how she wanted to do more than simply act like the Princess of Wales, "It's one of the saddest stories to exist ever, and I don't want to just play Diana — I want to know her implicitly. I haven't been this excited about playing a part, by the way, in so long."

Stewart is not the first person to play Princess Diana in recent times. Actress Emma Corrin played Lady Diana Spencer on Season 4 of The Crown, and her portrayal of a young woman becoming part of the royal family earned rave reviews. Stewart's version of Princess Diana is later in her life, when she was already mother to Prince William and Prince Harry, who would have been around 14 and 11 when the movie takes place, and contemplating a royal divorce.

Production of Spencer began this month and is expected to be released in the fall of this year, ahead of the 25th anniversary of Princess Diana's 1997 death in Paris.