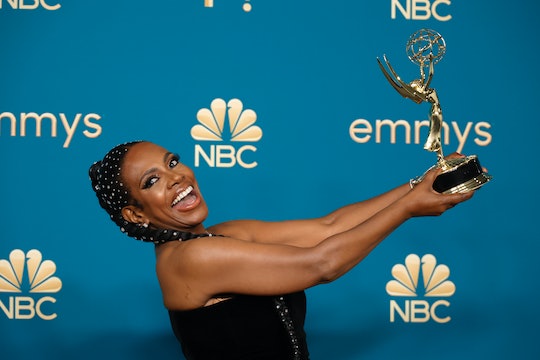 Photos Of The Abbott Elementary Cast At The 2022 Emmys

The cast of Abbott Elementary dressed up nicer than school picture day at the 2022 Emmy Awards, where they rocked the red carpet with sparkling hair, fabulous thigh slits, and bold colors that are totally glamorous. Seeing your teacher outside of school always feels a little strange, but these talented actors looked just as comfortable at the Emmys as they do in the classroom — and they definitely commanded more attention than they get at school, too!

Brunson, who took home the Emmy for Outstanding Writer of a Comedy Series, opened up about choosing an outfit that made her feel special for tonight’s awards.

Ralph (Barbara Howard) wore a black Brandon Blackwood dress with a thigh-slit. She also had dazzling jewels in her hair and on her face.

Chris Perfetti (Jacob Hill) wore all black with a bowtie.

These pictures are definitely fridge-worthy!