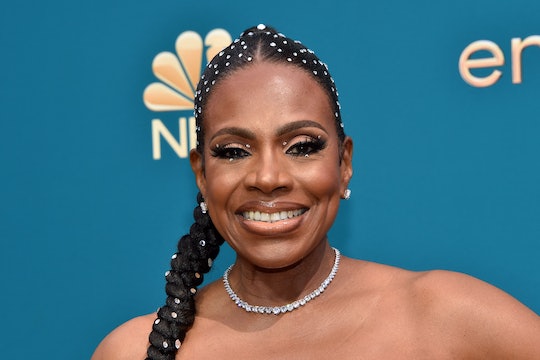 The Abbott Elementary star literally sparkled on the red carpet.

Sheryl Lee Ralph left her pastel cardigans at home as she walked the 2022 Emmy Awards red carpet, where she looked stunning in a fitted black gown. The Abbott Elementary star was (literally!) sparkling with her long braid bedazzled with diamonds and matching sparkles lighting up her eyes.

On Monday night, the star won her first-ever Emmy award for Supporting Actress in a Comedy Series for her portrayal of elementary school teacher Barbara Howard on the hit mockumentary style sitcom, Abbott Elementary. For the occasion, she wore a strapless black gown with a bold thigh slit and paired it with matching black heels and a red purse, but all eyes were on her diamonds. Ralph’s glittering hair and twinkling eye makeup outshined even her elegant diamond necklace, which shown in the camera lights on the red carpet.

Her look was noticeably different from her teacher character, which Ralph recently said she doesn’t dress like in real life.

"I mean, you gotta love a woman who can clutch her pearls,” she added.

Ralph was with her son Etienne Maurice in Jamaica when she was notified about her Emmy nomination. The video of the cute moment went viral with her son cheering “Yes! Mommy!” about the exciting news.

Ralph shares Etienne, 30, and daughter Ivy-Victoria, 27, with ex Eric Maurice, and has been married to Sen. Vincent Hughes since 2005. The senator walked the red carpet with Ralph, wearing a matching black tux. Variety posted video of the moment on Twitter, where you can see how Sen. Hughes absolutely adores his wife from the sidelines.

In an interview with Glamour on Sept. 9, the former Dreamgirls star shared the marriage advice she gives her kids. “To my son, I say, ‘Please just marry the woman that I pick out for you because you have had the worst taste. If you listen to your mother, you will be very happy.’” This is so relatable! Mother knows best, right?

But she has slightly different advice for her daughter. “To my daughter, I say, ‘You must find somebody of equal yoke because you are a dynamic woman. You have to find a man who is strong enough to shine in your light. And you must be strong enough to share the light with him. If you can do those things, go on and get married to that man.’”

What a true inspiration! Ralph is glowing from the inside out tonight.

More Like This
Sheryl Lee Ralph’s Speech Was The Most Inspiring Moment Of The Emmys
Abbott Elementary's Sheryl Lee Ralph Received A Beautiful Gift From Beyoncé
Emmy Winner Michael Keaton Thanks His Parents For Supporting His Acting Dreams As A Kid
Mindy Kaling & B.J. Novak Joke About "Complicated Relationships" At The Emmys