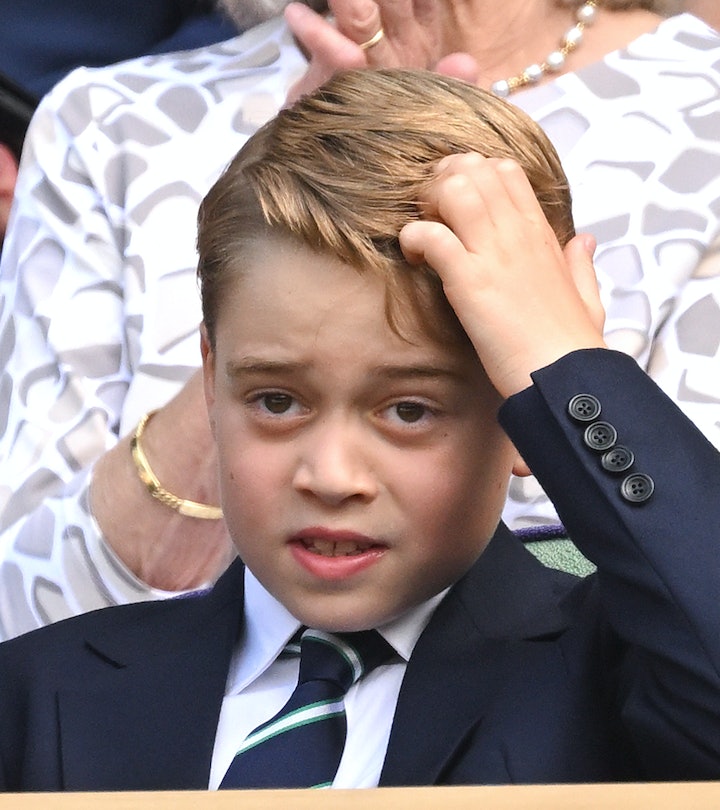 The Many Moods Of Prince George During His Wimbledon Debut

There was a lot of worried lip-biting!

Ask any 8-year-old boy to sit still for longer than two seconds, and he gets a little antsy. Add a suit and tie, July heat, and royal protocol, and, well, it can be a little exhausting. Prince George was poised and proper at his Wimbledon debut on July 10 — for the first few minutes. But the 8-year-old royal, who sat in between his parents Prince William and Kate Middleton to watch the Gentlemen’s Singles Final in the Royal Box on Sunday, went through a full spectrum of moods as the match went on. From hiding behind his hands to running his fingers through his hair in worry, Prince George didn’t shy away from expressing all his feelings!

Prince George was dressed in a navy blue suit, which coordinated with the Duchess of Cambridge’s blue-and-white polka dot dress. The Duke of Cambridge wore a brown jacket over a light blue button-down shirt paired with a dark blue tie. Prince George’s hair was combed neatly to the side, completing the grown-up look. And while he did his part to smile and wave at all the right moments, he also really got into the match between Serbia’s Novak Djokovic and Australia’s Nick Kyrgios. At one point, he made a round “o” with his mouth, and another he grasped his hands together with a worried expression on his face.

The Duke and Duchess of Cambridge posted about the event on Instagram yesterday. “Another year, another incredible tournament here @wimbledon,” they wrote in a joint statement. “Congratulations to @djokernole on becoming Men’s singles Champion again today and to all the players who participated over the past two weeks. Last but not least, to the staff, team and community who make this special event happen 👏🎾🍓.”

Middleton, who is an avid tennis player herself, and Prince William attended their first Wimbledon match of the year on July 5. However, they didn’t bring their oldest son until Sunday’s game. Their other two children, Princess Charlotte, 7, and Prince Louis, 4, were notably missing. Could this have anything to do with the youngest royal’s antics at the Queen’s Platinum Jubilee? Or maybe they just don’t enjoy tennis as much as Prince George, who plays tennis, too. See the range of emotions (and cute faces!) he went through at his first Wimbledon appearance!

At one point, Prince George stuck out his tongue in a look of concentration.

Another time, the little royal bit his lip and while he looked on. His eyebrows were scrunched up worriedly.

He ran his fingers through his hair and clenched his teeth, clearly nervous about what he was seeing.

Prince George looked like Prince William’s mini-me as he clasped his hands over his mouth and looked out with an amused expression.

He let out a sigh with one hand over his eyes in the picture of relief at another cute moment.

When he was afraid to watch, he covered both hands over his face. But in order not to miss anything, he opened his fingers to peek out with one eye.

The little royal looked unsure while watching the match at another point, as he was biting his lip and clapping.

The Duchess of Cambridge leans over to say something to George, making him smile as he bites his lip.

It’s hard to say if he was getting in trouble or if he was just upset by the match, but Prince George was pictured with one hand over his eye and the other eye closed while Prince William whispered something in his ear.

Prince George rested his head on both hands, which were tightly clasped together, as he watched the match.

If “Huh?” was a face, Prince George nailed it. His nose was scrunched up, eyes squinted, and mouth opened at one point.

He grits his teeth and looks mostly angry, with a hint of a smile, at one point. Either something didn’t go his way in the match or he’s just being silly (or both?).

Cameras caught Prince George in typical 8-year-old fashion — with one finger up his nose!

He points something out to his dad, Prince William, who looks on interested.

On a hot summer day, Prince George stayed hydrated drinking from a stainless-steel tumbler. But he never took his eyes off the match!

The little royal made sure to smile and wave at the cameras and onlookers at the event, showing impeccable royal politeness.

Prince George grinned so big it reached his eyes.

At the end of the day, Prince George was happy. He had a blast at Wimbledon with his parents!