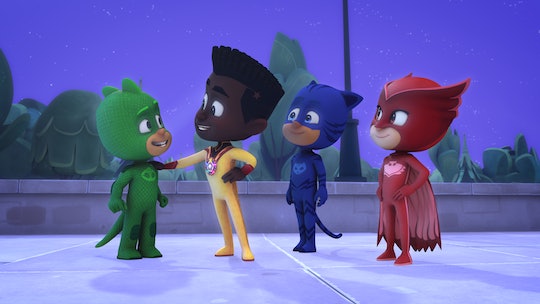 Look our for some interesting new characters!

Preschoolers and the caretakers who appreciate a bit of a break by way of screen time can rejoice. Season 5 of PJ Masks is coming soon and the three adorable little superheroes will kick off the newest season with a two-part special.

The New Season Premieres In August

Catboy, Owlette, and Gekko are coming back to Disney Junior and DisneyNow starting on Aug. 13 at 1 p.m. ET/PT. The three little masked superheroes who have dedicated their lives to fighting evil with teamwork and generally positive social behavior have become massively popular with young fans and adults alike, particularly since they model such exemplary lives. Just be normal during the day and fight crime at night, who could go wrong with this concept?

Look Out For New Friends (Or Foes)

A new season of PJ Masks also means new foes, starting with Orticia who is described as “a spiky, territorial little girl with witchlike powers over plants! She declares the museum as her home and starts growing freaky plants” in a press release shared with Romper. There’s also a “small metallic villainous robot,” named Pirate Robot, “who wears a pirate hat and an eye patch. He has a ‘good’ eye which can extend like a telescope and his hands can take form as culinary utensils!”

The New Season Premieres With A Two-Part Special

Season 5 opens with a two-part special called Ninja Power Up, which will introduce another new villain called Night Ninja who breaks into HQ to steal all of Catboy, Owlette, and Gecko’s powers from the PJ Crystal. They in turn transfer their powers to their PJ Pets and train them to be heroes. It all sounds very exciting.

You Can Catch Up On First Four Seasons

As you and your little ones wait for Season 5 of PJ Masks to start, you can catch up on the first four seasons on Disney+ or watch Seasons 1 through 3 on Netflix.

PJ Masks will also be introducing more than just some fun new characters when the season kicks off on Aug. 13. There will also be new vehicles on the show like the Spanner of the Skies pirate ship and Gigantogarage, which chomps vehicles. Not surprisingly, toy versions of these new vehicles will be available for sale at Walmart and on Amazon along with new action figures, dress-up items, and playsets.