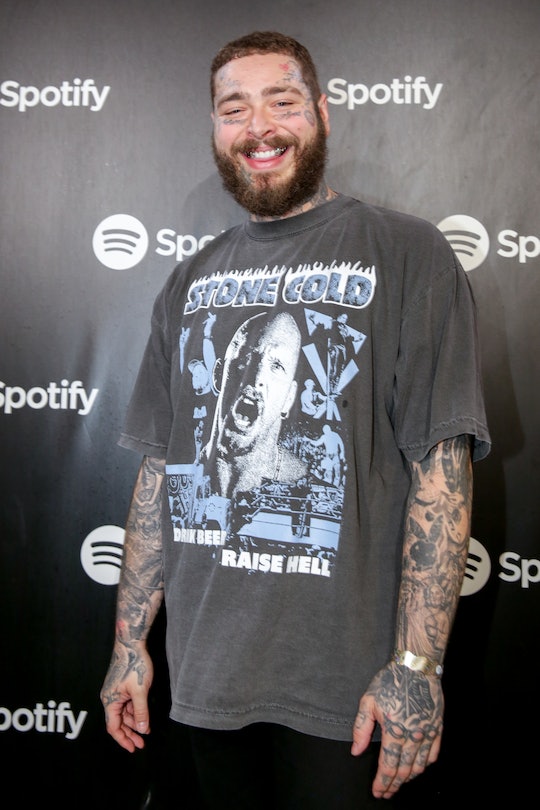 Including his experience with diaper blowouts.

Post Malone is fast discovering one of the hardest parts of parenting now that his baby daughter is here — leaving them. Even if you’re off to perform at sold out concerts, it’s not easy. And in a new interview with GQ, Malone opened up about how “heartbreaking” it is for him as a new dad to leave his daughter behind while he goes off to work.

The “Sunflower” singer welcomed his first child, a baby girl, back in June with his fiancee. The notoriously private singer has not shared any information about either of the women in his life, choosing to keep both of their names and identities private because, as he told Howard Stern at the time, “I want to let her make all her own decisions.”

While he’s not interested in sharing details about his baby girl’s name or her mother’s identity, he was willing to open up about how being a dad has changed him. “It's really tough not being able to see her, but she's coming out more often now,” the proud dad told GQ in September. “I'm just happy to see her. But it is heartbreaking having to leave and not be able to be with her all the time.”

When she does join her dad on tour as she gets a little older, listening to his music apparently won’t exactly be a hardship for her. “She hasn't cried whenever I put my music on so far, which I think is a good sign, but we'll wait and find out,” Malone told GQ. “I got to let her decide. I tried to play her some stuff, but I can't really tell what she's into right now.”

One thing Malone might not miss when he’s away? His daughter’s diaper “blowouts,” which he says are a sign that she’s definitely his child. “The blowouts,” he told GQ when asked about the craziest part of parenting so far. “She will blow out sometimes and it’ll come right outside of her pants. The poop will just be dripping out and I’m like, ‘What the hell happened?’ That’s how I know it definitely is my daughter — not that I have blowouts, but that I know my way around a toilet.”

As for her personality, Malone described his daughter as “a legend” who, at just a few months old, already has a “swaggy” sense of style. With a little help from her parents, of course. “We got her overalls, Realtree camo everything, some nice hoodies, some zip-ups. She's so cool. She's way cooler than me, but she definitely took a little inspiration from me.”

These two clearly inspire each other. Malone admitted back in June that he was ready to prioritize family, health, and spreading love once his baby arrived, “I’m excited for this next chapter in my life,” he told TMZ at the time. “I’m the happiest I’ve ever been, and for since I could remember I was sad. Time to take care of my body and my family and friends, and spread as much love as we can every day.”

Post Malone finding real joy and love in fatherhood is just about the most precious thing out there right now. How can you not love it?