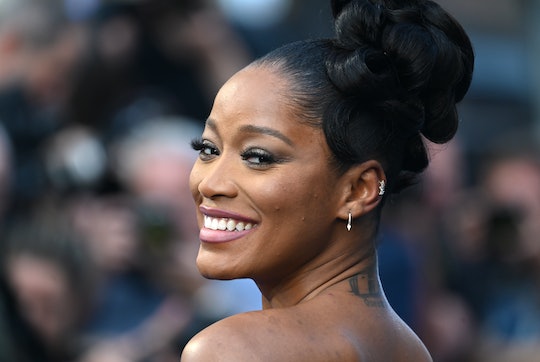 The mom-to-be is glowing in green and pink.

Dancing to “Use Ta Be My Girl” by The O'Jays, Palmer showed off her moves in a bright green dress and cropped pink jacket. “that's not my car in the back,” she jokingly captioned the TikTok video.

The video has been liked over 2.4 million times on TikTok and fans are clearly excited for the Nope actress’ next role as a mom. “From ‘Baby that’s KeKe Palmer’ to ‘Keke Palmer, that’s a baby,” one viewer commented. Another wrote, “I’m happy for Keke Palmer like she’s my real cousin.” Another jokingly commented, “Keke Palmer I’m calling MADEA,” referring to her role in Tyler Perry’s 2006 movie Madea’s Family Reunion as a teenager.

Palmer is expecting her first child with her boyfriend Darius Jackson. She first made the bombshell announcement while hosting Saturday Night Live earlier this month. “There’s some rumors going around, people have been in my comments saying, ‘Keke's having a baby, Keke's pregnant,’ and I wanna set the record straight — I am,” she announced during her opening monologue as she revealed her bare bump. “You know, I gotta say though. It is bad when people on the internet spread rumors about you y’all, but it’s even worse when they’re correct. But honestly this has been the biggest blessing, and I am so excited guys — I’m gonna be a mom!”

Palmer is not only busy with a baby on the way, she also recently launched her own network, KeyTV Network. Before revealing her pregnancy, Palmer admitted to E! that it’s “not easy” to balance her work and personal life, but makes sure to check in with herself often. “You're always trying to figure out how to maintain it,” she told the outlet. “It's not easy and I would not ever say or give the impression that it is because it's not. So, I'm always working to make sure that I'm checking in with myself as much as I can.”

She added to E! that the “personal half” of her that we don’t see on TV is pretty darn relatable. “The side of me that's not a performer, that's at home watching documentaries and TV shows and old sitcoms. And that just wants to be with her family and hang out with my cat, Jackie — that side of me also needs love too. Again, it's day-to-day balance and checking in and be able to maintain both of those parts of myself.”

Shortly after revealing her pregnancy on SNL, she reflected on how “this year has taken me for a ride” on Instagram. “And how cool, my baby and I are already doing it all together. Thank you God! Thank you to my amazing parents and family who continuously support me,” she captioned her post. “Love is all we have isn’t it, you do nothing in this world alone and trust me, I am not alone! Very grateful… Happy Holidays!”