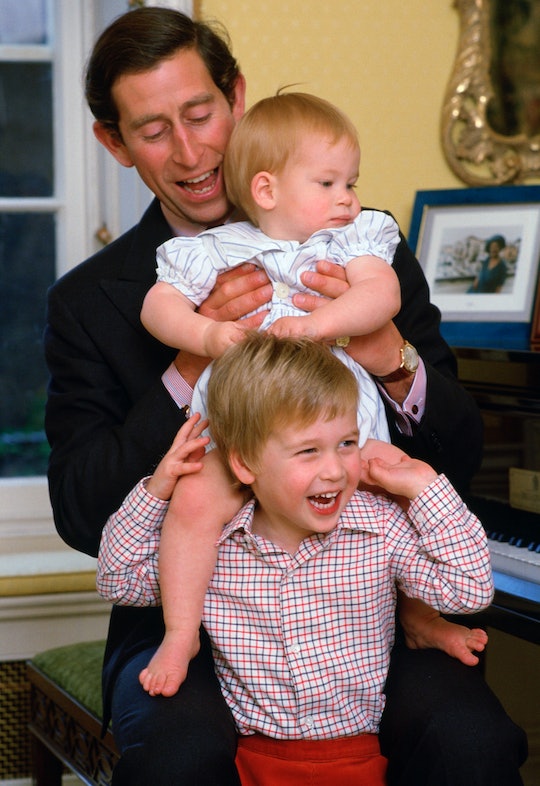 Prince Charles Was The Original "Mr. Napkinhead" In This Precious 1985 Video

Prince William’s tiny British accent is too much.

Royal fans are well aware that Princess Diana was an exceptionally hands-on royal mom. There are reams of footage of her playing with Prince William and Prince Harry as children, taking them to school, even effortlessly dealing with a toddler tantrum if need be. But it’s a rare moment indeed to catch the notoriously straight-faced Prince Charles engaging with his sons as little boys. Which is why a recently unearthed video of Prince Charles making 3-year-old Prince William giggle is so precious. It’s a glimpse at the type of father Prince Charles may have been in private to his two little boys, and they both lapped it up.

In October 1985, royal photographer Tim Graham visited Prince Charles and Princess Diana at Kensington Palace for a family photo shoot. At the time, Prince William was 3 years old while Prince Harry was just 1 year old, and the two boys were having a blast together. Banging away on the piano, running (or in Prince Harry’s case, crawling) around the room as the patient photographer tried to catch family moments on film.

In an effort to help Graham get a shot of both his sons smiling, Prince Charles called out to little Prince Harry before putting a napkin on his head and playing a game of peak-a-boo. Like an early version of Jude Law’s character from The Holiday, so now we know who did it first.

Skip to 54 seconds into the video to see the sweet moment.

Prince Harry might not have been terribly interested in his father, the future King of England, putting a napkin on his head for all the world to see, but Prince William got a kick out of it. Getting a giggle out of Prince William seemed to spur Prince Charles on and encouraged him to play with his sons. After a quick show as Mr. Napkinhead he joined them at the piano, where he put Prince Harry on Prince William’s shoulders and then had to quickly take them apart as the baby pulled his big brother’s hair. Who, as all toddlers love to do, fell dramatically to the ground as though he had been shot.